Best of the Maldives: Mas-Huni – Medhufushi 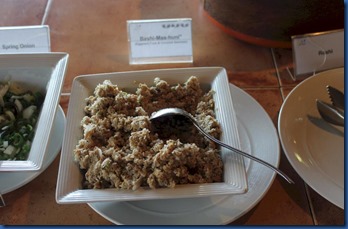 Quite possibly the most distinctively traditional Maldivian dish you will find at a resort is the breakfast staple – Mas-huni. It is a delicate blend of fresh reef-caught tuna mixed with coconut, onion and a touch of chillies served on a light, thin flatbread (called “roshi”). It is light, healthy with both the tropical flavour tinged with coconut and a touch of piquancy with the chillies. It is Lori’s favorite dish in the Maldives and she has it everywhere they serve it so she has become a bit of a connoisseur (I enjoy it as well, but prefer to indulge in the sumptuous variety of the breakfast buffets more extravagantly). You can get it at most resorts. Being a pretty basic and popular dish, I haven’t featured it in the Best Of series yet, because there wasn’t that much variation. But I finally found a buffer offering worth calling out at Medhufushi. They offer two styles of Mah-Huni (until our visit, I didn’t even know there was more than one style). The Bashi-Mas-Huni is made with a squash like eggplant, butternut squash or pumpkin added.

Posted in: Best of the Maldives \ Tagged: breakfast, Medhufushi 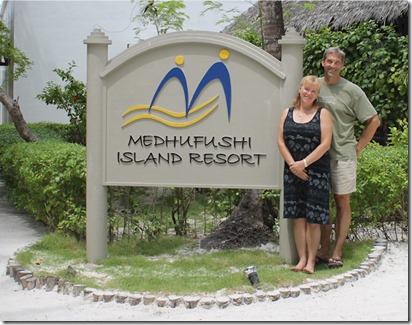 The Medhufushi resort itself is yet another unsung gem. I’m not sure what people are thinking about when they say no one can afford to visit the Maldives any more. Yes, a number of luxury marques have splashed out on billionaire playgrounds, but you don’t have to stay there. Especially where there are resorts like Medhufushi that provide all the magic of the Maldives at incredibly reasonable prices.

Medhufushi isn’t perfect, but with its 4-star rating, it doesn’t profess to be. It is one of the older resorts and there is a bit of cosmetic wear-and-tear, like some frayed thatch and faded paint, in places. But, when it was brand spanking new, it was a 5-star and priced as such.

So what do you get?

Everything above are 5-star attributes. So what are the trade-offs preventing this from being a top flight 5-star property?…

If snorkelling and the Internet are not preoccupations for you and not everything has to be sparkling new and groomed, then Medhufushi is a brilliant opportunity to tick the Maldives off your bucket-list of dream vacations with property that is still 5-star in so many ways, but at an affordable 4-star price.

Posted in: Best of the Maldives \ Tagged: Medhufushi

Maldives is like nowhere else on Earth, and Meemu atoll is unlike any place in the Maldives (well at least judging from the 14 of the 18 major atolls I have visited).

Meemu atoll was a bit of a mystery to me. With only two resorts, Medhufushi (which has been less prominent in the European market) and Hakuraa Huraa (which itself was closed for refurb a while back), not much was written about it.

We hadn’t really thought much of the differences between the atolls until our visit to Addu (aka Seenu) last year. It had a very different look, being much smaller, so its islands that are peppered along the circumference embrace you with a wrap-around vista on the interior.

Meemu is the opposite of Addu’s intimate cuddle as Meemu stretches with a diameter so wide you can’t see the other side. Meemu is also the opposite of island laden atolls like Kaafu and Ari sprinkled with green dots of inner atoll islands in the middle. It is pretty much devoid of islands on the interior. The combination of this topology and only 2 resorts in the whole atoll gives Meemu an unmatched sense of remoteness. Just you in the middle of the Indian Ocean, with a few islands to sustain you and keep you company.

But don’t worry about being precariously isolated. Just a few minutes north is one of the bigger islands in the Maldives and capital of Meemu – Muli. It has a hospital that puts you closer to advanced medical treatment than most resorts and a range of other amenities.

I’ve never seen such a mill pond calm expanse of open ocean (see video above). The inner atoll is like glass. Not just at dawn, but in the middle of the day. The expansive shallow (10 metres) on the east side of the atoll with the clear water of the calm sea imparts a robin’s egg blue for miles as well as a glassy veneer.

Not only the seascape, but the soundscape (around its two resorts) stand out. All of the out edge parts of the atolls are characterised by a constant flow of rolling waves at the vast Indian Ocean swells are tamed by the Maldives outer reefs which keep the atoll insides calm. At some resorts, this constant white noise creates a soothing soundtrack for the island (eg. Four Seasons Kuda Huraa, Canareef) with the island situated close enough to the edge of the reef and the topology of the reef producing a more dramatic wave crashes.

Meemu’s eastern edge stands out for a number of reasons…

The potential downside of the atoll is house reef snorkelling. Neither resort has “house reef” that is directly accessible from the beach. World famous Maldives snorkelling can be a part of your visit with a short boat ride that both resorts offer constantly (to make it as easy as possible).

A big part of your decision to go to either of these resorts will be whether the extraordinary qualities of the atoll itself appeal to you. Some aspects are purely subjective (I was sort of partial to the Hakura Huraa look and design, but Lori preferred Medhufushi). Both have overwater restaurant/bar, fine food, comfortable villas, and attentive service. Medhufushi had more traditional styling, outdoor showers, swimming pool and generally lower prices. Cinnamon Hakuraa Huraa has more contemporary styling, entertainment, and beach activity. 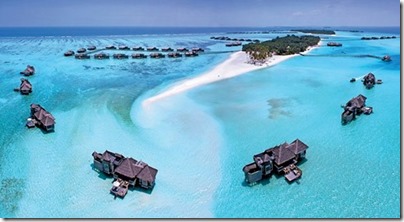 The Maldives are renowned for diminutive islands (a plot of sand and a palm tree). But at some resorts, the “island” has diminished to nothing at all. Don’t worry…it’s not the often reported “sinking of the Maldives”. It’s just resorts bringing their guests closer to the alluring seascape and more remote from the rest of the world.

Gili Lankanfushi (above) was the one who started it all with their lagoon villas (and dedicated boats to ferry guests to and from their villas). And it still commands the destination topping, paragon of the concept, their Private Reserve.

Jumeirah then took the concept to a whole new level by making a stand-alone neighbourhood of water villas.

Now a small collection of room types not so much “marooned” as “maritime”. I excluded the “yachts” even the semi-permanent moored one (eg. The Rania Experience, Huvafenfushi’s Dhoni Suites) because it’s not quite the same even though they too are places to stay out in the middle of the water.

Thanks – again – Paola (who prompted the list and initiated the research). 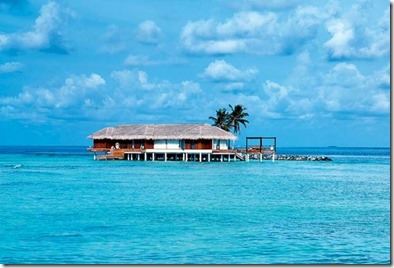 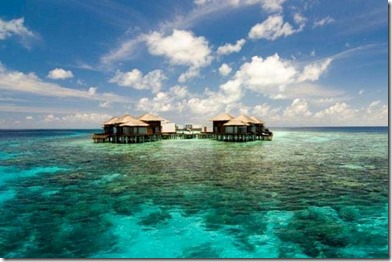 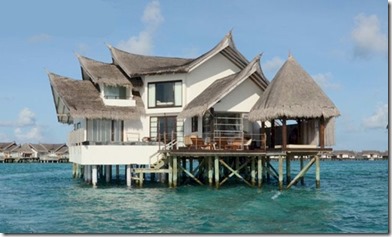 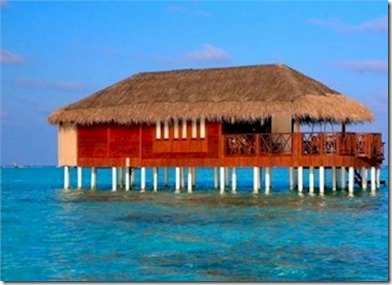 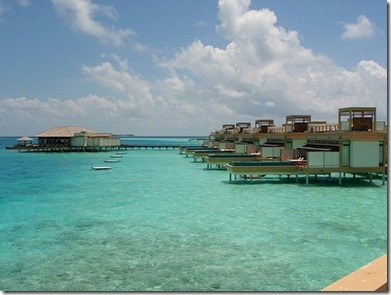 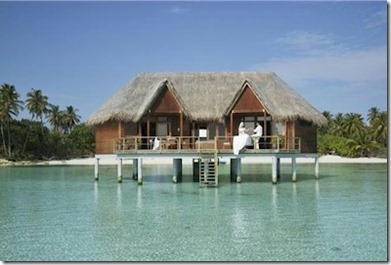 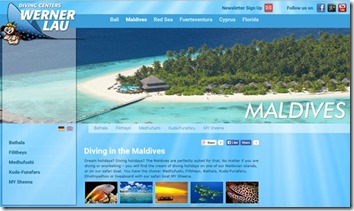 When describing my motivations for adding a Dive Site database to Maldives Complete, I noted the lack of interactive guides. Most diving information is traditional hard-copy book form or magazine websites that provide articles and overviews, but not a structured, interactive resource.

The exception to this standard approach is the Werner Lau dive centre website. They have cleverly integrated a mapping of the dive sites near their centres with Google Maps to provide an interactive layout of all of the dives sites local to their 4 Maldives dive centres. You can scan the area for websites who have ToolTip annotations and then simply click on their names to take you to a full profile of the dive site complete with dive chart.