A common refrain in the chorus of praises sung about the Maldives spotlight the wonderful warm people that welcome them and make the stay delightful. A great resort is a one which nurtures this natural resource of human warmth and hospitality by treating its resort employees as respectfully as the guests would hope to be treated. The resort which stands out in this regard according to the Maldives jobs website Jobs Maldives is the W Resort…

“’Talents’ are what the W Hotels call their employees. This not only encompasses the skill set needed to work at a luxury hotel, but it also speaks of the individual personalities that portray the “Warmth of Cool”…Though the island is small there are several opportunities provided for the talent: W Lifestyle and Language training, Talent-of-the-Month award ceremonies, Trips to Male, Cultural excursions, fishing trips, BBQs, sport competitions with other islands, monthly birthday parties and a newly finished sport court for soccer, basketball, badminton and volleyball. Says guest Gina Johnson from Dubai, ‘You can just tell how happy, genuine and informed the staff are. You see that they take a lot of pride in their work.’”

Best of the Maldives: 2010 Calendar – Soneva Gili and Soneva Fushi 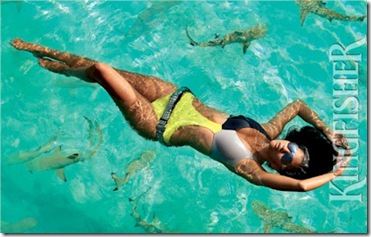 Still looking for that last minute Christmas gift? Calendars for the new year are certainly popular and if Maldives is what you seek, then Soneva Gili and Soneva Fushi have hosted this year’s Kingfisher Swimsuit calendar.

What strikes me about several of the shots…is the sharks (I know most readers and my wife are thinking, 'rrriighht…you’re looking at the sharks in that picture??…hmmmm…’). The mini black-tipped reef sharks are as common to Maldives lagoon shallows as squirrels are to Central Park and just as skittish. We can never get close to the cute little sharks without them scurrying away. But the model doesn’t seem to have any problems attracting the cruisers to her. And the shot below is just too much with the shark on the left with its mouth open like it is smiling for the camera. 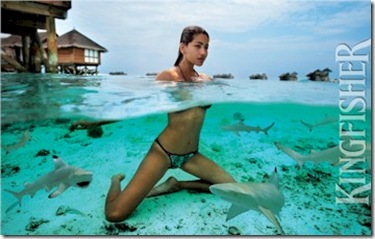 Best of the Maldives: Most Bars – Kuramathi 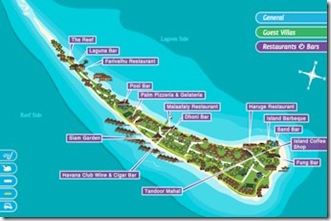 Kuramathi island just this past month combined the three ‘resorts’ there – Blue Lagoon, Cottage Club and Village – into a single, consolidate resort. It always was a bit confusing having them sold as ‘separate resorts’ though all on the same island and sharing the same infrastructure.

The consolidation means it is one of the largest resorts with the most extensive facilities. Its 290 rooms is amongst the largest, it has 9 room types. But perhaps most prominent is the sheer number of its watering holes. 7 in total including a wine and cigar bar.

We visited several years ago and were pleasantly surprised by the resort. It had been somewhat affected by the tsunami which led to some renovations and the new work was a 5-star standard (eg. the new spa), not the 3-4 star quality that the resort had been known for. The new renovations accompanying the consolidation seem to have upgraded the island even further. Also, we were apprehensive about going to such a big island because we loved the distinctive diminutive quality of the Maldives, but we were struck by how little the size put us off. We couldn’t walk the circumference between drinks and dinner, but it still had a quaint, remote and intimate feel. The picture below is the family enjoying a game of Pirateer (our traditional Maldive board game) chillaxing at the ‘Pool Bar’. 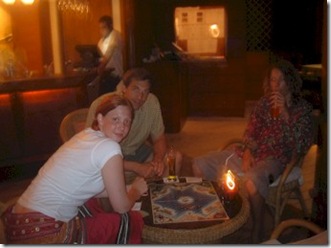 Posted in: Best of the Maldives \ Tagged: bar, best of, drink, Kuramathi

Best of the Maldives: Seating – Kandooma

Speaking of cool seating, Kandooma recently completed a revamp of its resort and its web page so you can get an good sense of the impressive overhaul. The first item to strike me was its ‘funky’ beach chairs. Actually, when I was in Kurumba last month, I remember thinking to myself how all these fancy resorts have all this distinctive design and yet when you look at the beaches you see the same old white, plastic beach loungers one sees all over the planet. They just seemed a bit pedestrian relative to how remarkable the locale is. Kandooma seems to have decided to make their beach seating as eye catching as the beaches themselves.

I also love how they have created a special ‘in water’ seating area at their new pool (see below). You often find ‘bar stool’ seating in Maldives pools, but this is the first time I have seen lounge seating right in the pool. It is like having a stationary lilo complete with side table.

In fact, funky seating seems to be a real focus for the new design will all sorts of quirky chairs sprinkled across the resort. Examples include the Kids Club ‘swing seats’ and ‘Pineapple Chair’ lounger shown below and the gallery on their website has plenty more. 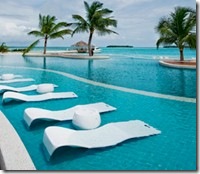 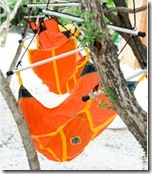 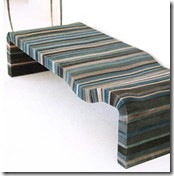 Posted in: Best of the Maldives \ Tagged: best of, Kandooma, relaxing, seating