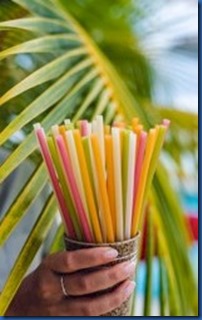 When most of what there is to do all day is savour pina coladas in the sun (or whatever your favourite tropical tipple is), plastic straws can pile up. Most resorts are moving away from plastic to a variety of sipping tools (so much so that with this post I have introduced the “Straws” tag). LUX south Ari Atoll has introduced another variety of edible straws:

Black Friday! The biggest shopping day of the year. Of course you will need something to carry all those purchases and you don’t want to be adding to the landfill with shopping bags. If you do your early Christmas shopping at Conrad Rangali you not only get a useful and stylish bag for your shopping and more, but the bag itself doesn’t just stop added plastic consumption, but it actually removes waste plastic from the ocean. The bag is made from recycled plastic removed from the ocean. Parley’s website describes 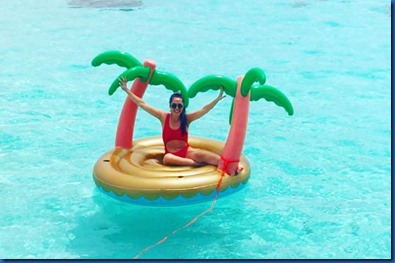 Posted in: Best of the Maldives \ Tagged: float

Best of the Maldives: Plankton Condiment – You & Me 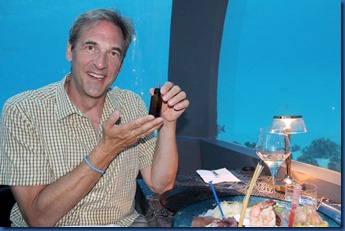 No matter how many toppings or how exotic the flavours, I have not come across any item on the menu as exotic as You & Me’s underwater restaurant H2O – plankton! More for a whale shark’s palette than appetite as it was presented in an eye-dropper bottle as part of the seafood platter. You sprinkle the “plankton” on the delicacies for that extra bit of taste of the sea. It didn’t really taste of anything other than just some seawater, but I guess that for mantas and other filter feeders, to them its all just sea water to them too.  Something small (actually microscopic) before the big feast of Thanksgiving tomorrow. 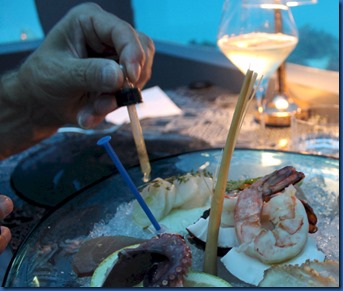 Posted in: Best of the Maldives \ Tagged: dining, You & Me 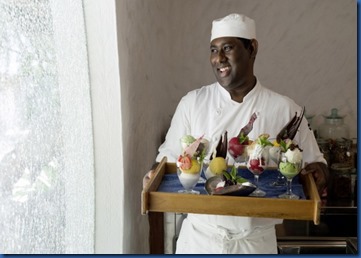 Best of the Maldives: Make Your Own Sundae – LUX North Male Atoll 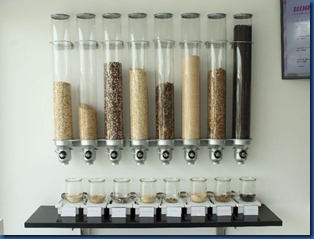 Buffets are part of the fabric of Maldives resorts, but I’ve never come across an ice cream buffet like LUX North Male Atoll sundae counter at its ICI ice cream parlour. It took me back to perhaps my earliest memory of personalised, decadent taste treats – Putnam Pantry. Back in the 70s, we would make the half hour drive to “make your own sundae” and their ice cream smorgasbord which was the ultimate treat or birthday party. But, not surprisingly, LUX surpassed even the American penchant for excess with 18 flavours of ice cream, 6 sauces, 8 toppings and a range of other accessory treats. 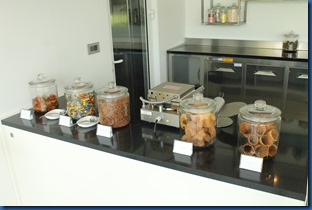 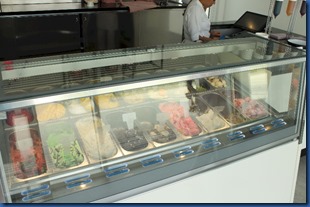 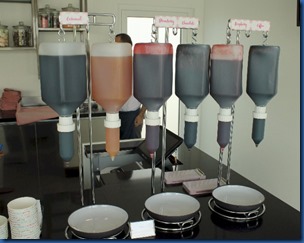 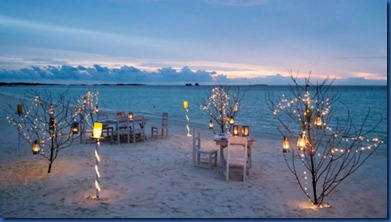 Guess Who’s Cooking for Dinner. Sometimes you never know who will turn up. Soneva Jani is taking the “Chef’s Surprise” to a new level where the chef themselves are part of the surprise:

The price per person varies based on the particular menu of the day, starting at $175 for Soneva’s chefs and $350 for a degustation menu by a visiting international chef. “Guess Who’s Cooking” is only available two to three nights a week, seating just 16 diners. Dinner is served from 7:30-10:30pm, while a sunset cocktail experience is offered from 6:30-7:30pm. There will also be the occasional lunch pop-up from 12:30-3pm.

Posted in: Best of the Maldives \ Tagged: dining, Soneva Jani 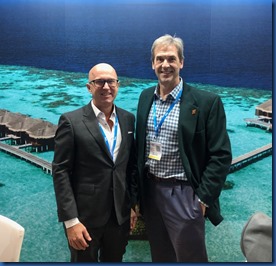 This year’s World Travel Market was like a trip back to where it all began. In more ways than one.

First, I bumped into to one of the charter members of the Maldives GM Hall of Fame (figure of speech) – Jason Kruse. After I had developed Maldives Complete as a way to play around with new web technology at Microsoft and to share my trove of Maldives resort information, it was our family trip to Jason’s resort (just before he arrived), Kurumba, that convinced me that I should invest a bit extra in this undertaking. Throughout our stay, various Maldivian staff came up to me and said, “Hey, you’re that Maldives Complete guy. We love your website.”

While I had made it a policy to never re-visit a resort I had already seen (primarily because I wanted to see as many resorts as possible), Jason convinced me to stop by Kurumba again during one of our first tours in 2011. He and his wife were so much fun and so helpful with information about the Maldives, that we subsequently made an exception to our steadfast rule and ended up visiting Kurumba every year as a part of our tours. It was a convenient final stop near the airport, but primarily a great chance to catch up with Jason and Victoria.

Sadly, those annual catch-ups have been interrupted a couple of years ago when Jason took on a resort manager role in Fiji closer to his home in Australia. But Jason is back! He has taken on the GM role at Amilla Fushi. And he was at WTM London to get word out about some of the changes being introduced there. Sounds like some classic Jason magic and I can’t wait to see what he does there.

If that long-time-no-see meeting wasn’t enough, my next meeting was even more nostalgic. Every year that I have been going to WTM, I always check out whether the country of Togo, West Africa has a stand. Togo was by first stint as a travel researcher and writer. I was stationed there as an overseas correspondent in 1980! My first experience in investigating and sharing an exotic destination with the world. Togo has always been a small country and has been hit with its own challenges (like most of Africa) since the fall of the Berlin Wall (when the two superpowers stopped caring about the continent as pawns on a geopolitical chessboard and unceremoniously and disruptively upped stakes leaving discord and conflict in their wake). They haven’t really had the resources to rebuild its tourism industry…until now. Strolling over to the “Africa” section, I came upon Togo’s first stand and had a chance to meet with their representatives (see below) from the same Tourism Ministry that hosted me to their own colourful and enchanting country four decades ago! 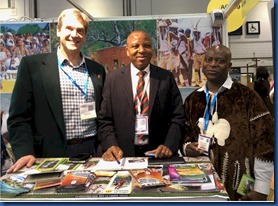 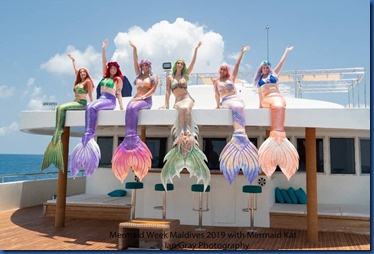 Little Mermaid Day today celebrates the release of the eponymous Disney movie. In recent years, this now classic film is getting a reboot though sadly not with one of my favourite actors (Dwayne Johnson)  as King Triton). So time for a sequel to the Maldives Complete’s own “Mermaid” series with the latest seashell bikini-ed, finned fashionistas in this unda’ da sea paradise (who had its own Mermaid Week just recently)… 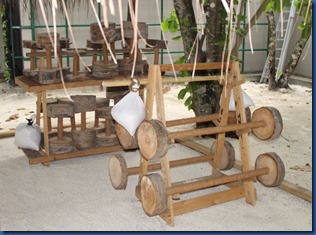 Looking for an all-natural workout. Joali features possibly the most natural workout equipment I have ever come across. In the Maldives or elsewhere. No plastic or metal (!), just wood. It has a real Flintstones vibe. If the Swiss Family Robinson ever opened a fitness centre on their castaway island, this is what it would look like. And yet, free weights are free weight. Plenty of heft for good workouts.

I’m a big aficionado of woodwork (admiring, not making) and I’m surprised I don’t yet have a “Wood” tag for all the features using this rich, natural material (but I do now). 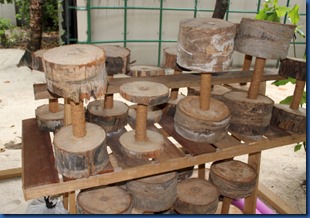 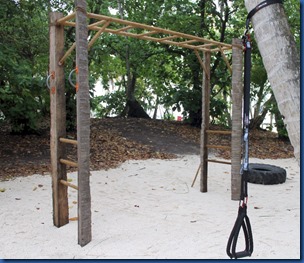 Posted in: Best of the Maldives \ Tagged: fitness, Joali, wood