I’ve been running a series of posts of the range of eco-friendly approaches various Maldive resorts are taking as the Maldives asserts itself as the most carbon progression nation on the planet. It’s not just about using the planet’s resources wisely, which many carbon reduction and intelligent design approaches have concentrated on, but it can also be about restoring, renewing and replenishing the environment.

Banyan Tree Vabbinfaru received the EC3 Global annual ‘Seed Award’ for its efforts to restore the reefs around the island during and after the construction. The EC3 site includes a great video on the various efforts undertaken.

“Banyan Tree’s in-house Marine Lab at Banyan Tree Vabbinfaru celebrated its fifth anniversary in January 2009, making it the longest running resort-based marine research facility in the Maldives. In the past five years, the Banyan Tree Maldives Marine Lab has been involved in major projects such as tsunami recovery efforts, working with endangered and threatened marine species, planting coral gardens, mentoring at-risk children, and sharing sustainable livelihood methods with local communities. The successes of the Banyan Tree Maldives Marine Lab have shown that private resorts can enable stewardship and understanding of their own reefs, as well as that of the whole Maldives archipelago, protecting against phenomena such as beach erosion and coral bleaching due to climate change.”

Posted in: Best of the Maldives \ Tagged: Banyan Tree Vabbinfaru, best of, eco-sustainability 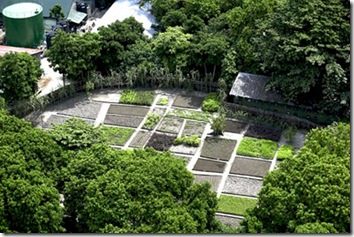 As I talked about in my last post, the drive from carbon reduction is no where more intense than in the Maldives. One of the better pieces that I’ve read about the issue was the Sunday Times article ‘Trouble in Paradise’.

While Alila Villas Hadahaa has set the bar for the villas that make up the resort, carbon footprint obviously extends to the whole infrastructure. Right now, one of the leaders in driving reductions is Soneva Fushi which has set its plan to become the first ‘carbon free’ resort. The blog on ‘Maldive Resort Workers’ reports…

“The resort is already bragging about the achievements so far and points out to the cooling system for their guest rooms which uses chilled sea water drawn out from deep sea below 300m. The deep water cooling system (a 1st in Maldives) is expected once finished to replace all electrical Air conditioning units and reduce 20% of the total power demand of the island. They also claim this type of air conditioning on the island alone would save $200,000 and stop a 700k tons of carbon emission.”

The Soneva Fushi website outlines their Social and Environmental approach and initiatives in full detail.

Posted in: Best of the Maldives \ Tagged: best of, eco-sustainability, Soneva Fushi 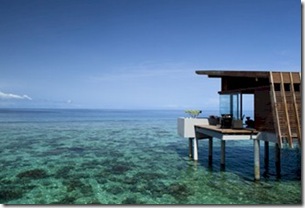 With the country of the Maldives pledged to become the first carbon neutral sovereign state in the world, all of the resorts are ramping up their green credentials. Mind you, being a collection of tiny, remote islands has always meant that the country has had to be pretty careful about managing its limited and expensive resources.

There are lots of ways to cut the resort carbon footprint across the infrastructure and operations, but one prominent ways is the villas themselves. One of the earliest and most advanced in this area is Alila Villas Hadahaa…

“Alila Villas Hadahaa is the first property in the Maldives to achieve the prestigious Green Globe ‘Building, Planning and Design’ benchmark and was designed to best adapt to the tropical climate and natural environment of the island. This includes rainwater harvesting, waste treatment, high roofed areas and open ceilings. To confirm their local social responsibility, the resort has just launched a “Gift-to-Share” programme.”

The eco-friendliness extended to the spa villa as Alila Villas Hadahaa also was called out for the top Eco-Spa’ in the Maldives in the 2009 Asia Spa Awards.

Best of the Maldives: House Reef Drop Off – Filitheyo 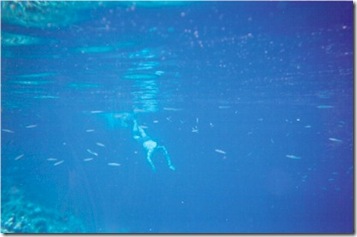 One of the absolute joys of the Maldives is the snorkelling. There is plenty of debate in the diving community about the top dive spots in the world. The Maldives always ranks up in the elite top with the likes of the Great Barrier Reef, Cayman Islands and the Red Sea. There don’t seem to be as many ‘top’ lists or guides for ‘snorkeling’, but it would be hard to see how the Maldives could be bested for its clarity of water, comfort of water temperature, diversity and quantity of fish, and a range of other variables.

For a snorkelling neophyte, there is a sort of progression of steps one should take to build up to the main event…

Once you visit the ‘drop off’, the rest of the snorkelling will seem rather tame though it will always have its comforts and charms.

I can personally attest to how great the Filitheyo house reef is and its drop off from personal experience with me pictured above here diving into its depths.