If you are looking for an even shorter ‘pit stop’ in Male than a day stay, then the Holiday Inn Male offers distinctive facilities (to use a common euphemism) for that too.

Many of the bathrooms are distinctive with outdoor facilities or perhaps a water bungalow with the bath over the water, but the Holiday Inn Male actually has a distinctive toilet itself. It features the ‘Toto Washlet C110’ toilet which is the gadget lovers commode with NASA-like capabilities. It is the only toilet that I have ever used with a Control Panel.

“With the touch of a button, a nozzle extends from under the seat for soothing warm-water cleansing, virtually eliminating the need for toilet paper. The nozzle, which self cleans before and after every use, can be set to move back-and-forth for maximum comfort and optimum cleansing. The specially designed contoured seat is also heated to provide maximum comfort.” 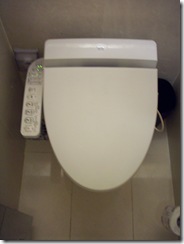 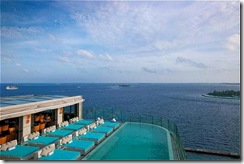 Most people want to stay in the Maldives as long as possible. Some friends have shared that they really downshift into super-relaxed mode after the better part of a week there making a second week all the more indolent. It used to be that two week trips were not that much more expensive in total than the one week equivalent, but the shift to commercial flights from charter and the generally more expensive resort rates have made the costs more proportionate.

However sometimes travel logistics mean that just a short stay is called for (‘Male Short Stay Hotel’). I personally was just blown away by the Holiday Inn Male when we visited there on a day trip (Best for Pool Seating, Best for View). Now that they have made it even easier to just pitch up and ‘stay’ there, I really think it is the best option for someone with just a day to spend in the Maldives.

“Our hotel has developed a series of day packages, allowing travellers to use the facilities of our hotel, taking away the frustration of waiting and instead providing a pleasant and relaxing end to their stay in the Maldives.” 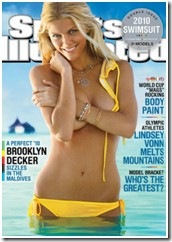 The iconic Sports Illustrated Swimsuit Edition, nearly as renowned for its spectacular locations background as it is for its bathing beauty subjects in the fore, has set its shoot in the Maldives. In particular, the resorts of Anantara and Naladhu had the please of hosting the crew from SI Swimsuit 2010. The venue ties into a bit of an eco-theme. I’m not sure the models can speak very authoritatively on climate change, but they are certainly role models for consuming less…clothing. 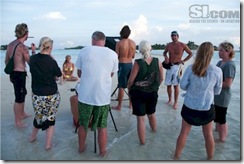 Posted in: Best of the Maldives \ Tagged: Anantara, best of, event, Naladhu

Many people think of a trip to the Maldives as a holiday *of* a lifetime, but now Coco Bodu Hithi are offering a trip *for* a lifetime.

“Would you like to win your holiday for a lifetime? Win a fabulous two week holiday on Coco Palm Bodu Hithi….EVERY YEAR…for a lifetime!!! The prize includes a stay for 2 persons at our Club Coco Palm on Coco Bodu Hithi for 2 weeks (14 nights) on half board, including airport transfers with a speedboat.  Simply take part in our competition game and collect 10 “Coco Coins”. If you collect 10 “Coco Coins” you have a very good chance to win this fabulous prize. You can enter the competition at any point in time! Browse through our new website in the time period between January 25th and March 4th, 2010 and search for hidden suitcases. You will find a new suitcase every day from Mondays to Thursdays, somewhere on our English website. Simply click onto the suitcase and remember the item that is hidden in the suitcase. Every found item equals 1 “Coco Coin”. Repeat looking for hidden suitcases until March 4th and collect 10 “Coco Coins” in total. The last hidden suitcase will give you the chance to put your    10 collected “Coco Coins” into the competition draw, by filling out the provided form.”

I’ve looked several time through the website in the past few days and I couldn’t find a single suitcase, but maybe you all be more eagle eyed.

Best of the Maldives: Reefscaping – Kandooma 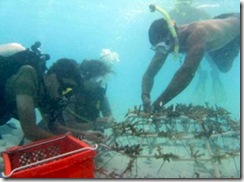 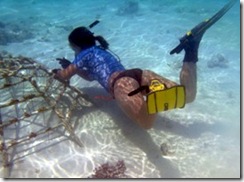 With all of the discussion in the past few posts of what the Maldives and resorts are doing for conversation and the environment, it turns out that ecologically-minded guests visiting Kandooma can turn their activism into a holiday activity.

Always wanted resorts to put up a board where people could plot their snorkelling sittings of the day and week. Kandooma has something heading in that direction with a ‘Marine Biologist Update’ which at least shares the latest aquatic goings on literally (or should I say ‘litorally’) ‘around’ the island (sorry – bad pun day).

“The Reefscapers initiative is a synergy between the tourism industry, reef science and the local community around coral propagation projects. Coral propagation is a promising research field in the present global warming context, even though heavily debated as a possible solution, when compared to the surface of the coral reef threatened by climate change. With this in mind, Reefscapers developed in the Maldives, a new versatile technique, using light weight modules, to mitigate the adverse direct impacts to corals during tourism development. The success encountered when mitigating adverse impacts from infrastructure development has led to the continuation and development of the project using second and third generation fragments, with eventually 2000 m2 of reef created. So far, applications are mostly targeted towards aesthetic and recreation, but the technique also seems promising for erosion control and island protection. Recognizing the potential of the technique, the Maldivian government has decided to encourage the initiative by providing an island in order to carry out larger scale experiments.”

At the it says, Reefscaping has now extended to other resorts (Landaa Giravaru, Kuda Hura), but Kandooma was the first and is the most extensive.

(Pictures above from Crystal’s blog of her experience)