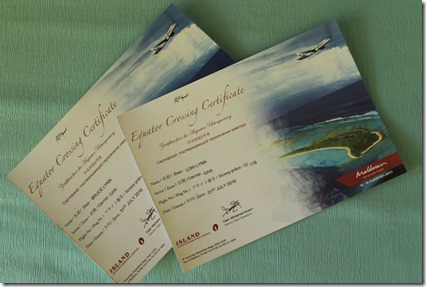 Last year’s tour took us to the very tip top of the Laccadive atolls, and this year’s trip takes us to the tippy toe – Addu (aka “Seenu”) atoll.

So far south that when you fly Maldivian Airlines, the pilot makes an announcement when you cross the Equator and the flight attendant hands out personalised “Equator Crossing Certificates” (see above photo).

Most Maldives atoll sprawl over dozens of miles and they are peppered with lots of little dots of islands inside them. You can cast a gaze on the horizon and typically see one or two of these green blots floating on the ocean. Addu, however, is one big circle of “islands”. Look on the inside of your location an you will see the thin emerald ribbon (periodically broken up) all around you. Look on the outside of your island and you will see nothing by wide open Indian Ocean (all the way to Antarctica to the south).

The one main downside to the marine topography is the limitations on classic house reef “drop offs”. These tend to be the domain of those intra-atoll little dots of which Addu doesn’t really have any. But the atoll delivers a range of other enticing attractions that might just make Addu well be worth the trip. It hosts 3 very distinctive resorts – Canareef, Shangri-La Villingili, and Equator Village. The turbo-prop transfer is about half the cost of a seaplane transfer to other islands that don’t have local airstrips (Haa Alifu to the north also has an airport). Being off the beaten path a bit means that its fine dive sites are not as crowded. We were all alone at our dive today and casting a glance on the horizon, there were only a couple of dive boats scattered among the dozens of dive sites. Famous manta haunts like Lankan and Hanafaru are so crowded that they have had to start limiting the number of divers visiting them. We were the only divers when we visited Addu’s own Manta Point (see below). The group before came up to our boat and told us they saw 9 mantas, but the current shifted and we only saw one. That said, he seemed as big as 9!’

Addu atoll feels like a sort of “Maldives Keys” (for anyone who has made the famous run down to Key West in Florida). A necklace of islands strung together surrounded on both sides by stereo ocean vistas.