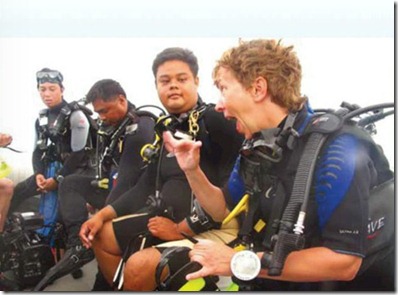 In honor of Dhivehi Language Day yesterday, we feature a post on a universal language. One familiar to speakers of all languages who dive in the Maldives.

Diving is probably most people’s first introduction to actually using sign language. That is except for the hearing impaired, of course, for whom the underwater world is just as east to converse in as above water. Worldwide Dave and Sail offers a range of diving holidays for the deaf and this week takes them to the Maldives for a wide ranging itinerary including a stop at the Kuramathi house reef.

“Ever wanted to take the plunge, but you have been unable to take that giant leap because you are D/deaf or hard of hearing? Do you find it hard to understand instructors in big classes? FRUSTRATED?? Not anymore… Welcome to Worldwide Dive and Sail where your worries will disappear. We use a wide range of communication methods to ensure that everyone can understand and participate; these being: BSL, ASL, lip-speaking, gestures and fingerspelling. We aim to accommodate everyone, whatever their communication needs are! Please note, however, that all our trips will be a mix of D/deaf, hard of hearing and hearing people.”

If you would like to enhance your silent vocabulary of underwater words, then I highly recommend Scuba Hanna’s YouTube channel which is the most complete collection I have found. She does an entire 3 minute video on just different signs for different species of shark, and all sorts of fish I never knew the signals for like angel fish, and clown fish.

Posted in: Best of the Maldives \ Tagged: best of, online, video 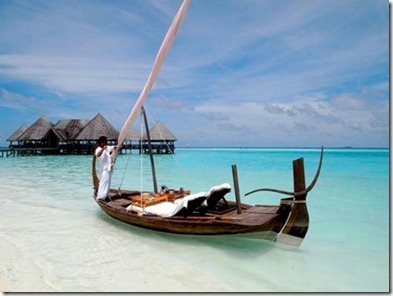 If you want a traditional floating breakfast with even more traditional mode movement (and more natural and quiet), then you want Soneva Gili’s sailing breakfast (you can rinse your hands naturally too by just reaching over the side). For a price of $100 per person (exclusives of 10% service charge and 6% GST)…

“We offer Continental breakfast selection for this dining experience. The selection can be offered as per the guests choice and availability and feasibility to serve on the sailing boat.”

Posted in: Best of the Maldives \ Tagged: best of, breakfast, dining, Soneva Gili

Best of the Maldives: Sanitizing – Kuredu 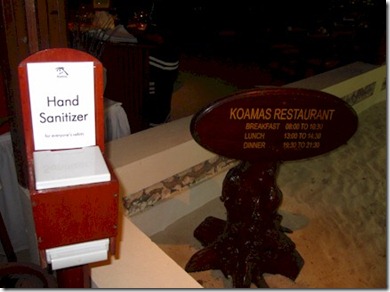 If your biggest health concern for your skin is germ-free rather than wrinkle-free, then the Kuredu has hand sanitizer dispensers set up all around the resort so people can have a quick clean. I guess I could also dub this one ‘Best for Hand Shaking’.

Posted in: Best of the Maldives \ Tagged: best of, Kuredu, service 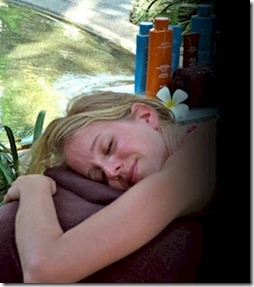 There’s soft against the skin, and then there is soft skin itself. With the beating that the sun can give the epidermis, one needs a little help to keep it fresh and supple. Yes, great products, but to that Reethi Rah adds and exceptional service…

“The Sun Spa Esthederm is a unique service which will identify each guest's individual skin sun potential and advise them on the best skin care to maximise their full tanning potential. Institut Esthederm has developed more than 28 different sun care products, which allow all skin types to get the benefits of the sun safely. They also allow users to get the desired results under any kind of sunlight intensity. A full day service by the pool or the beach includes the services of a professional Sun Spa Esthederm therapist who will start by preparing the skin for the sun and then apply and reapply sun cream every hour or two and after swimming according to the guest's skin type and programme. At the end of the day, guests will enjoy an after sun treatment to sooth their skin and prolong their tan.”

It’s sort of like a ‘complexion butler’ or ‘skin crème sommelier’ (“Mademoiselle, we have a charming ‘Bain de Soleil 1973’ for a smooth body and a lingering fresh finish…”).  The only downsides are that the only choices on the menu are from the ‘house’ of Institut Esthederm Paris, and the price is a vintage $200 per day.

Posted in: Best of the Maldives \ Tagged: best of, Reethi Rah, service 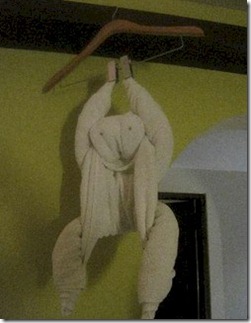 I was inspired by the terry cloth creature above to take the plunge into the latest social media – Pinterest. Pinterest allows you to set up albums to share collections of photos. I’ve already featured room art a number of times including ‘Bed Decoration’ and ‘Bed Art’, but this particular piece (shared with permission from guest Vincent Benita) is by far the most elaborate and cheeky I have ever seen.

The piece made me realise that I regularly come across great examples of bed and room decorations and rather than constantly revising my ‘Best Of’ posts, it would be better to create an honour gallery where al my discoveries could be collected and showcased. I’m started with the following two ‘Boards’…

I was tempted to create a ‘Maldives Sunset’ Board since there are so many prize examples of those on the web, but I’m going to start with these first. 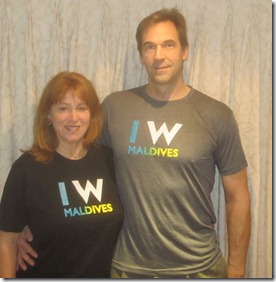 W Retreat is the cashmere of Maldives resorts. Soft, cozy and luxurious.

A bit of an off-beat recognition for a resort that does pride itself on off-beat stuff. But it is just so evident. When my wife Lori and I visited the W this summer, we were stuck by the quality of materials used in general, but especially the sheets (which have super high thread counts).

I thought that it would be a fun piece to do today being Easter which is all about soft, cuddly things like baby chicks and bunnies not to mention silky smooth chocolate to savor.

The GM of the W (GMW?) Lauren Kritzinger knew my pet peeve about resorts not having good t-shirts for sale. So he was gutted when their revamped styles had not arrived when we visited. I let him off the hook and took his word for it that they would be good. But, not content, Laurens sent me a couple of samples of the new product (see picture above) when we got home. And yes, the t-shirts are truly distinctive. And that is from a resort t-shirt connoisseur. Nice simple styling, but most distinctive is the material. The cotton is such a fine grade it is like silk. Not only do they feel fantastic, but they are lighter weight than any other t-shirt I have ever come across. Just right for the toasty sunshine of the Maldives.

Posted in: Best of the Maldives \ Tagged: ambience, best of, W Maldives 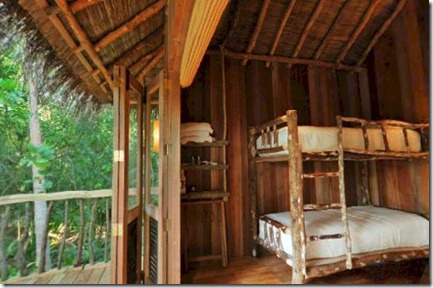 If you want to not just admire the trees, but sleep in them, then look into Soneva Fushi’s ‘Villa Suite and Treehouse’.

The whole concept evokes one of my earliest memories of exotic, tropical island is the movie the ‘Swiss Family Robinson’. A Disney, family version of its (probably intentional) namesake ‘Robinson Crusoe’. Not one man stranded in paradise, but a charming family. Of all of their innovative contraptions crafted from what they could scavange the most captivating was their treehouse abode. Ostensibly for protection from wild critters, but actually simply a pre-adolescently fantasy.

Soneva’s website includes a 360 virtual tour for a cinematic preview. 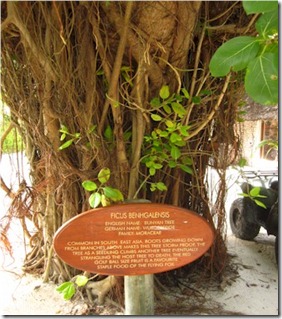 If you don’t have a tree guide book to hand but still want to know the identity and stories behind some of the striking landscape on the island, then you will appreciate Kuredu.

We often describe the Maldives as a plot of sand and a few trees. Everyone loves the sand bit, but the trees often go unmentioned and unappreciated. The palm trees are certainly a prevalent fixture, but the islands also have an arboretum of tropical curiosities like the Banyan, and (one of our favourites) the Walking Pine.

“Hernandia Nyphaeifolia – English Name: Lantern Tree…Grows up to 20 meters high and found in coasts of East Africa, Asia, and Polynesia including South Pacific. The seeds of this tree are spread by bats, the leaves, fruits, seeds and bark of the tree is said to have medicinal values. Tahitians polish the seed and make necklaces.”

Kuredu has posted a series of handsome and informative signs at prime examples of arboreal distinction across the resort which adds a bit of natural interest and insight during your strolls. 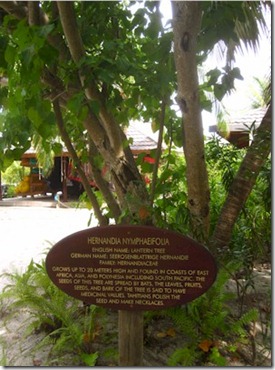 Posted in: Best of the Maldives \ Tagged: best of, Kuredu, landscape, tree 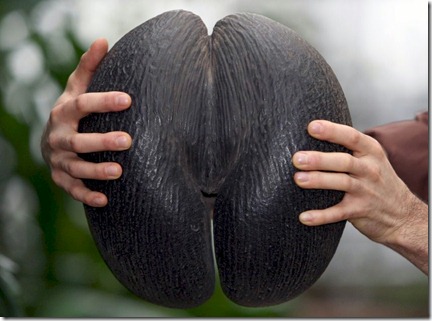 Having recently had a beer with a writer from QI and keeping up the humour, I thought it time for the next installment of ‘Maldive QI’…

“The captain surely imagined it all a little differently. The French adventurer Francois Pyrard intended on sailing to India in 1602. But when his ship Corbin gave out on the open seas, he had to seek refuge in the Maldives. Unfortunately, the king there wouldn’t let the shipwrecked party leave for five years. When Pyrard and his crew were finally able to flee, they took the tale of the strange fruit with them back to Europe. It had been found frequently on the beaches of the islands. It wasn’t just that they were gigantic, the fruit’s shape was also reminiscent of a woman’s pelvic region. The king demanded that these alluring finds be delivered directly to him, and threatened that those who didn’t comply would lose a hand, or even be put to death. What Pyrard saw was the nut of the Coco de Mer palm, one of the rarest palm trees on the planet, also known as the Lodoicea maldivica. It is three to four times as large as an average coconut. They are also heavier than anything comparable that biologists can find, weighing up to 20 kilograms (44 pounds).”

It actually grows in the Seychelles, but makes its way to its namesake islands (“maldivica”) floating on the Indian Ocean waters which may account for its colloquial name, ‘Coco de Mer’. Der Spiegel describes this intriguing species in some detail on the occasion of the Botanical Garden in Berlin succeeding in germinating it. Despite its rather fertility-suggstive appearance, it is actually dubbed the ‘Panda of the Plant World’ for its difficulty in growing.

I researched the beguiling nut talking to Verena Wiesbauer Ali who not only helped with the previous QI pieces, but also co-authored the first definitive picture guide to the flora of the Maldives ‘Maldives: Trees and Flowers of a Tropical Pardise’. There are dozens of various guide books to the underwater delights of the islands, but this is the first that provides a comprehensive catalogue with dazzling colour photos for land lubbers. You can get a copy by writing to the co-authour Peter Dittrich (25 Euros) to find out what coconut palms and every other type of colourful and curious tree and plants that do grow there. 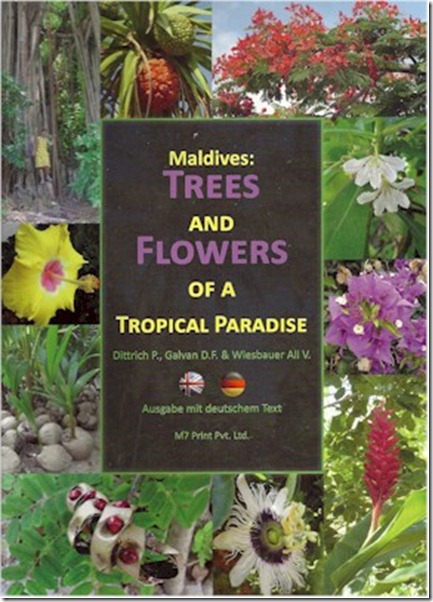 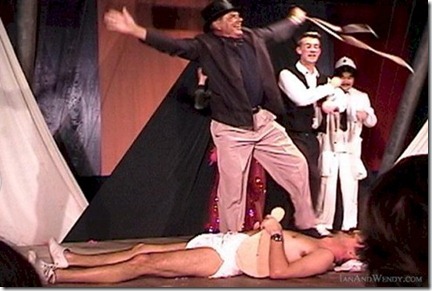 If you like a good laugh, then Club Med Kani is the top yuckster hang out in the Maldives. While tranquillity and quiet seem to the norm and aspiration for many Maldives resorts, I was struck by the truly boisterous energy (in the main areas…there are plenty of peaceful areas across the island) at Kani when I visited. Laughter in pool, in the games area, around the bar.

But the in the evenings, the resort undertakes its most ambitious humour with regular comedy shows. First of all, putting on comedy to a mulit-cultural crowd is a massive challenge. There is of course the language issue not mention the various cultural variations prevailing senses of humour. As a result, the entertainment does tend to devolve to the lowest common denominator of slapstick with liberal use of the language-independent mime. But beyond these fundamental challenges, I was stuck by the enthusiasm with which the guests embraced these shows. At many resorts, entertainment evenings are a tick-in-the-box distraction that draw a few semi-interested guests. But at Kani, the purpose-built the theatre area is regularly packed out with a lively audience.

Posted in: Best of the Maldives \ Tagged: ambience, best of, Club Med Kani