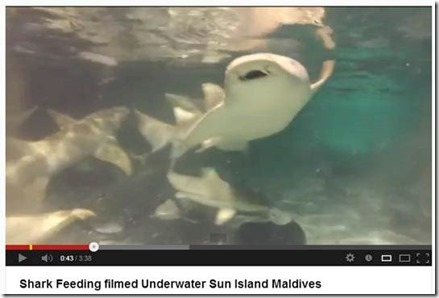 To feed or not to feed. That is the question.

Perhaps one of the many questions that might get addressed in this week’s infamous Discovery Channel “Shark Week”.

The feeding controversy rages across the online travel forums. The opponents tend to start from the ‘take only pictures, leave only footprints’ ethos of minimising interference in nature which is certainly a valid and sensible principle. To compound the protests are the quite serious health damage that can accrue to many fish when fed a number of human foods (most commonly breads). But there are also behavioural and other impacts to fish feeding practices. Even relatively safe foods fed from hands can make fish ‘aggressive’ to humans as they get thinking that any human will have some food to offer them.

Still, fish feeding remains an entertainment staple at many resorts. The most innocuous practice is to scoop out the large quantity of fish scraps that accrue from so many seafood dishes in the resort kitchens. These scraps are exactly the diet that the scavenging fish like sharks and rays eat anyway. Still, the dogmatic environmentalists will protest even these practices.

I’m sure it is not ideal.  It is certainly not all ‘natural’.  So why would I even consider supporting the practice.

It might be that there is a relatively small downside impact to the practice, but a rather substantial upside. That benefit would be the classic ‘zoo argument’. The notion that having zoos or feedings or other contrived (but controlled for animal welfare) practices that bring humans and animals closer together is good for both humans and the animals. In our manufactured, processed and urbanised world, one of the biggest threats to nature is mankind’s distance from it. When people don’t have strong and deep connections to these creatures, as they are just tasty filets on their plate, then they lose the political will to raise funds for their preservation and pass constraining laws for their protection. By offering guests these feeding events, it gives them an opportunity to witness up close these animals and their inspiring qualities.

The more interactions we can foster between humans and nature, the most admiration and connection we can foster to them, I am convinced the more the world will muster up the resources, understanding and interest in investing in their welfare.

I have seen many of these events at resorts and Sun Island was by far the most mesmerizing. You have the regulars like the rays and the jacks, but the star attraction at Sun were the sharks. Every island has an array of reef sharks. While some get to be quite sizable, few are over a metre in length and most are pygmy-like pups not much more than a foot long. Sun had these, some bigger than I have seen in the lagoon waters, but they also were visited by a collection of nurse sharks. These fellows are quite sizeable and have the peculiar behaviour of ‘sitting’ on the ocean floor. Before the feeding started, Lori and I had arrived early and noticed these and we couldn’t tell if they were really sharks or just shark-shaped rocks on the ocean floor.

The Sun Island shark feeding does respect a number of parameters which do minimise any deleterious effects. First, dietarily, they only feed with fish scraps which would be consistent with the shark’s natural diet. Second, they are feeding from a pier and not from hand (as some sting ray feeding is done and as now stopped diving excursions have done in the past).

Whatever ever your perspective on this healthy debate, enjoy the frights and insights of Shark Week so that everyone can respect and support these wonderful creatures.

Posted in: Best of the Maldives \ Tagged: best of, ocean, shark, Sun Island 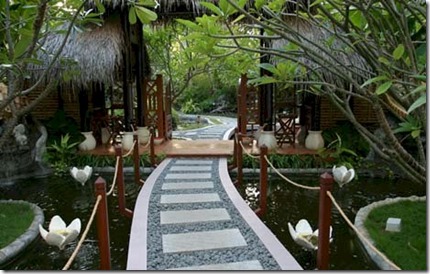 The reflecting pool. The increasingly prevalent third ‘water’ feature on a Maldives resort (after the swimming pool and, of course, the ocean). Very often these artistic aquatic creations are found at receptions of the resort and the spa. Sun Island’s Araamu Spa has a water feature as extensive as its treatment list. Many water features around the Maldives are simply the water and some add a few reef fish, but Araamu’s is a classic gold fish pond packed with colourful fish throughout.  A glimmering land lagoon! 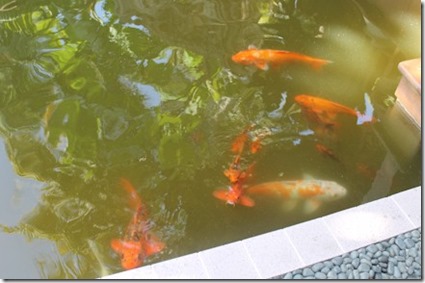 Posted in: Best of the Maldives \ Tagged: best of, decor, Sun Island 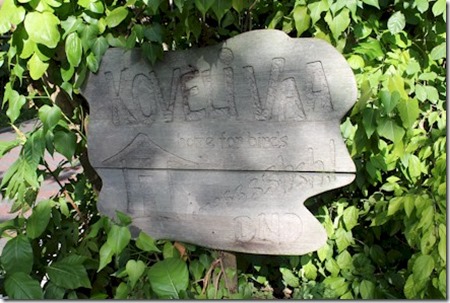 Another sanctuary for the airbourne is Sun Island’s Kovelivaa park, the biggest bird sanctuary among the Maldives resorts.

There is more to the Maldives fowl than herons (it seems as it every resort has its resident heron who combines stalking the lagoon shallows for fish with posing like a fethered statue for hours on end to charm the guests). Two lesser seen examples of Maldive bird life found on Sun Island are described below by the resort… 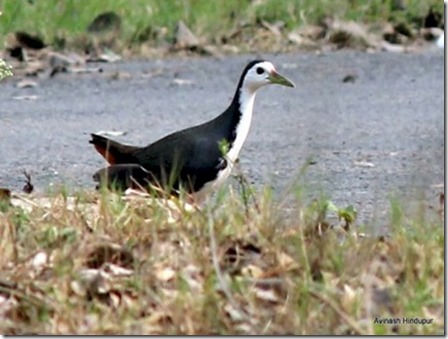 White Breasted Waterhen (Amaurornis phoenicurus) – “These white breasted waterhens are very calm and like to go along doing their work silently, unnoticed. As the name suggests, these birds are the water counterparts of normal hens and can be seen mostly near edges of water bodies. In [Sun Island’s] IIT, the best places to see them are the lake behind SAC and IITG lake. When no one is around, they are bold enough to venture on the roads, so watch out for them! Local names: Assamese” 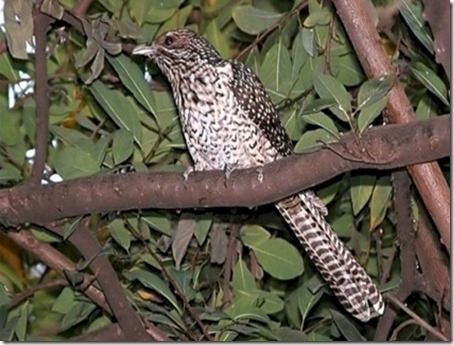 Posted in: Best of the Maldives \ Tagged: best of, bird, landscape, Sun Island 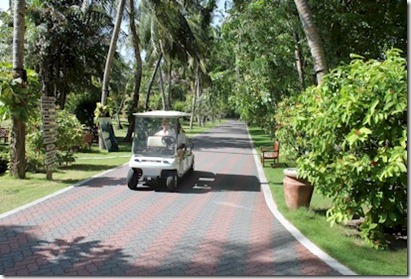 The ‘Best of Maldives’ I probably never thought I would give. Not only did I think I would never find ‘streets’ in the Maldives, if I did find them, I probably wouldn’t want to showcase them as I adore the no shoes, sand between the toes Maldives. But the streets on Sun Island aren’t just any streets.

An island as big as Sun Island starts to depend on a little conventional personal transport to get from one end to the other. Most bigger islands make do with electric buggies, but use sand paths in keeping with a natural, rustic aesthetic. Sun Island has a different ambience to it. Less deserted island and more tropical plantation. More retro-colonial than uninhabited. It still has acres of unspoiled natural splendour, but they are accented with touches of civilised elegance.

The ‘roads’ on Sun are a striking example of this design. Sun still has plenty of sand paths and the ‘roads’ are just a few main thoroughfare to get from one end of the island to another easily and smoothly. But the roads do not detract, but actually enhance to the look and feel having been laid out in such a refined way. No pedestrian asphalt or concrete, but rather colourful red and black brick lattice. In addition, the main streets are lined with smart lanterns hung from palm trees.

The combined effect also gives the island a bit more of a homey feel to it. Instead of feeling like some plot of sand with a few dwellings, you feel like you are in some exotic tropical community. It seemed a bit Dharma Project with its own distinctive exotic allure.

Posted in: Best of the Maldives \ Tagged: best of, infrastructure, Sun Island, walkways

Best of the Maldives: Most Spa Treatments – Sun Island 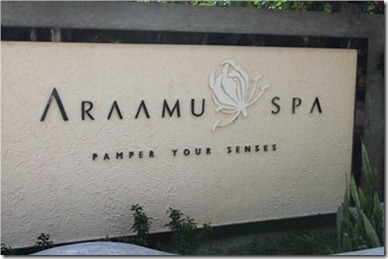 From multiple golf simulators, to many multiple rolf stimulators. Holiday Island’s sister resort Sun Island features the largest of the spa in the Villa properties – 105 different treatments in their phone-book-thick menu.  The Starbucks of Spas.

Posted in: Best of the Maldives \ Tagged: best of, relaxation, Sun Island 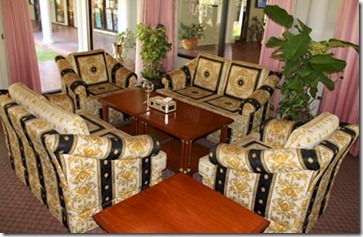 The fashion is all minimalist modern style in the Maldives as the moment. It does suit the diminutive and natural ambience of the islands natural beauty. But Sun Island’s old school rococo elegance of its reception evokes a bygone subcontinental era of Rajs and palatial splendour. Their sofas exude this opulence as do the other rich décor in their air conditioned lounge. When my wife and I arrived, it took us by surprise for its unconventional luxury and we thoroughly enjoyed this twist on sumptuous reception. It’s not classic Maldives, but it is classic.

Posted in: Best of the Maldives \ Tagged: best of, greeting, Sun Island 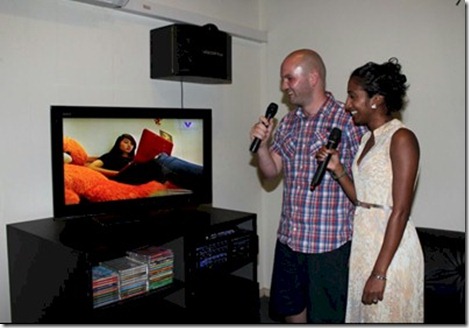 Tonight people around the world will all join hands at the stoke of midnight and belt out a chorus of ‘Auld Lang Syne’ for perhaps the world’s most pervasive moment of sing-along. Unfortunately, the vast majority of people don’t really know the lyrics beyond the first line and a few scattered words like “cup of kindness” and…well…that’s about it.

I once went to a karaoke private room in London for my friend David Hooper’s stag party. Rowdy music is always lots of fun, but it’s hard enough for the musically and stage-fright challenged in any event. Performing in front of strangers is a nightmare to some. The private room approach makes it more like having a sing-song among friends. It’s more intimate and party-like.

If you are interested in other New Years traditions, then check out NBC’s slideshow on them (slide #19 seems particularly apropos for Reethi Rah actually). 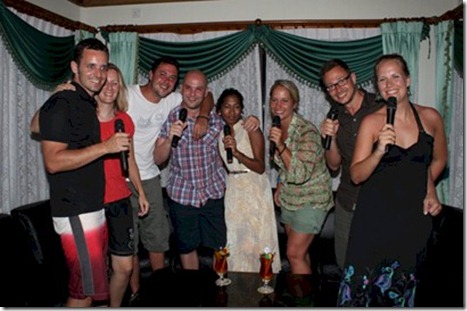 Posted in: Best of the Maldives \ Tagged: best of, entertainment, music, Sun Island 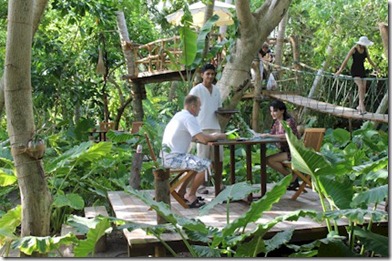 The Maldives is turning out to be an eight-year old boy’s paradise with all of the treehouses going up, up, up. The Sun Island rendition graces its ‘Zero’ restaurant set in a plush copse of dense tropical jungle. I’m so used to the dappled blues of the ubiquitous ocean, that I was struck by the shifted palette of greens of all shades and hues backdropping this exotic dining venue. Appropriately, the restaurant specialises in ‘greens’, especially salads freshly picked from its adjacent hydroponic garden. 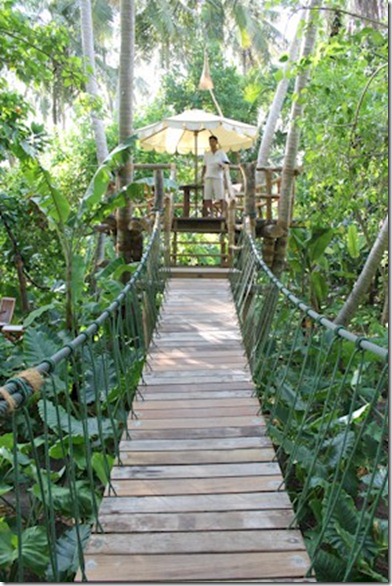 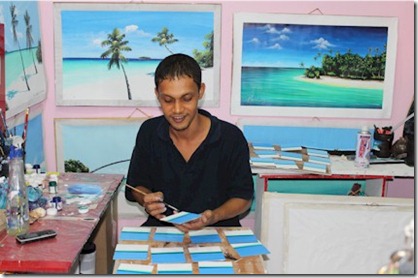 This weekend kicks off the holiday shopping season in the USA starting with the infamous post-Thanksgiving ‘Black Friday’. Guests of Sun Island can get their own jump on filling their Santa sacks with any number of treasures at Azym’s workshop. Azym is the resident artist there and wields his paintbrush in his shop there packed floor to ceiling with pieces such as pictures, bowls, frames and all manner of assorted decorative arts.

I find that local artwork is quite variable in quality not just in the Maldives , but at just about any tourist destination that you visit. Some will be quite amateurish and tawdry pieces, but sometimes you can find some real gems of talent and style. I would definitely class Azym as the latter. He captures the Maldivian blues that are bright but not garish. His depictions are simple without being crude.

And because they are made right there, so you can order something customised as a special memento to your stay and favourite memories. A certain part of the island or vista perhaps. 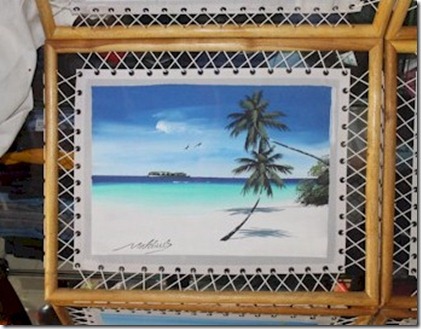 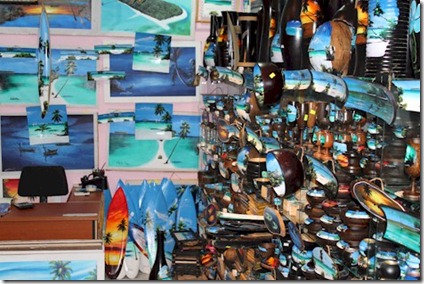 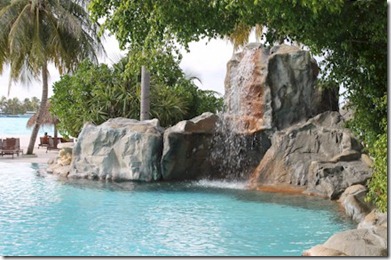 I love waterfall features in pools (no not Michael Phelps kind of pool ‘waterfalls’…in fact, one might want to be careful around the Conrad Rangali pool). Perhaps it is because they make the pool more alive with animation. Perhaps it is because it evokes one of my all time favourite adventures trekking into a Togolese jungle to visit the Badou Cascades. Perhaps they evoke some other stereotypically imprinted image of tropical paradise. Our very first resort in the Maldives featured one – the erstwhile Laguna Beach, now Velassaru (unfortunately, now sans waterfall)l. Sheraton Full Moon had an impressive one, but it was more adjacent to the pool than integrated into the pool (you can’t swim under it). So I was on a bit of a quest for the best Pool Waterfall in the Maldives.

I found my heart’s desire at Sun Island. Sun has not just one, but two striking waterfall fountains. Doubly dramatic. 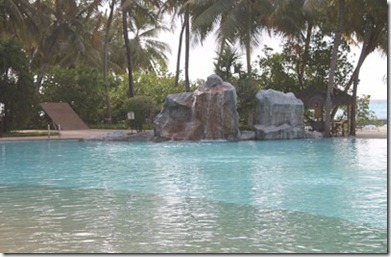 Posted in: Best of the Maldives \ Tagged: best of, pool, Sun Island