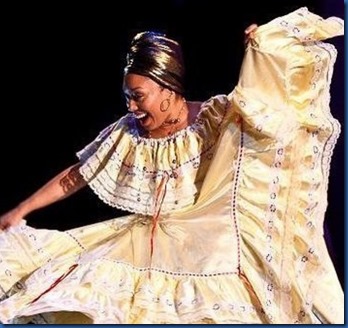 The Christmas and New Years holidays have a distinctive Latin vibe a Raffles Meradhoo with their “Raffles Revolution 2000”:

Dance workshops by Yesenia Selier (photo above), and music by Chino putting the sizzle into the salsa and the ay ‘kurumba’ into the rumba.

Posted in: Best of the Maldives \ Tagged: entertainment, Raffles Meradhoo

Best of the Maldives: Jet Pack Display – One & Only Reethi Rah

Spinning around One & Only Reethi Rah this past Easter was “world-renowned, real-life Iron Man, Richard Browning, also known as ‘the flying man’ [soaring] above the lagoon with his jet-powered super hero suit.”

Posted in: Best of the Maldives \ Tagged: entertainment, One and Only Reethi Rah 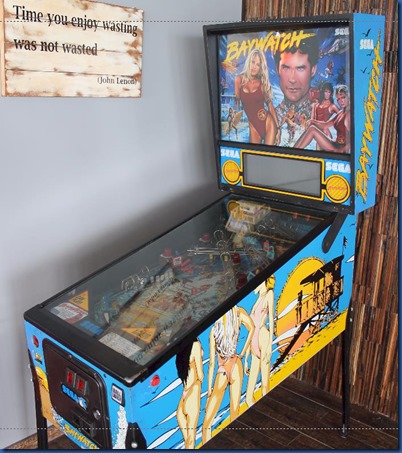 If you enjoy playing around on retro icons, but prefer something a bit more masculine, then check out Finolhu’s very own man cave complete with a collection of retro games including vintage “Baywatch” pinball (see above) and the classic PacMan (see below). In fact, the whole setting is a nostalgic throw back with retro sweets, décor, and soundtrack. 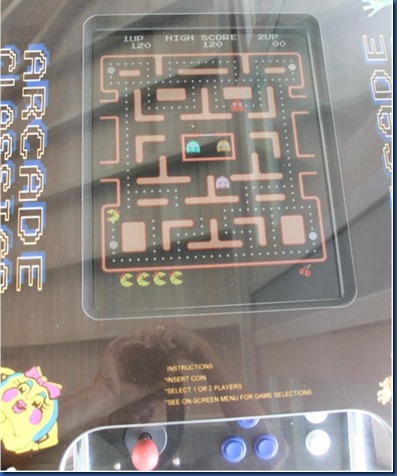 Posted in: Best of the Maldives \ Tagged: entertainment, Finolhu

It’s not just the sights, but also the sound of Christmas that surround you. Not just for advent, but all year round at Finolhu. And not just at the resort, but anywhere in the world where you want to tune into their vibrant soundtrack. Their Baa Baa FM features special DJs as well as a range of live shows Monday through Friday (2:00 – 6:00 pm Finolhu Time +6 GMT). When I tuned I recently, I was graced with the tunes of DJ Jaffa. Kandooma had a radio station years ago, but it stopped before I could do a piece on it.

Instagram allows you vicarious check out snaps of the Maldives’ scenery remotely, a range of webcams can provide a cinematic glimpse of tropical goings-on, blogs like Maldives Complete can keep you up-to-date on the latest developments and stories, and now you can enjoy them all serenaded by cool sounds of BaaBaa FM piped to you direct from paradise. 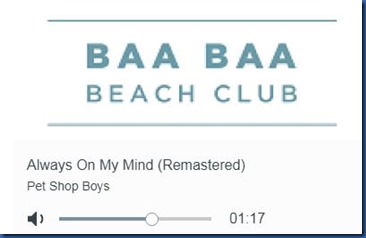 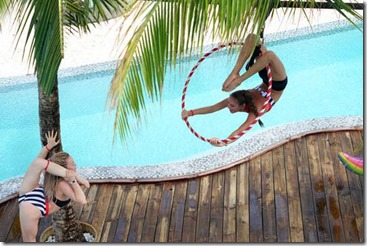 Finolhu puts the “Soleil” into the “Cirque de Soleil”. Today is International Sight day and some of the things you will see at Finolhu will make you not believe your eyes (including the occasional mermaid known to visit the island).

Finolhu has a bit of a retro Las Vegas nightlife vibe with its own resident entertainment acts high on showmanship and flair. They’ve featured hoops, silk banners, large hoops, fire dancing by a group called Area 51 which resident for three months. Then they circulate in a fresh set of artistes. When we visited a group from Mexico was there performing every night.

The resort explained that part of their contact is that during the day, the performers must work on new tricks and material. The idea is that the “artists-in-residence” have sort of a bootcamp for developing and refining their craft and act all the while sharing the fresh new work with the resort guests. Finolhu targets young groups early in their career so the booking can be a boost to their careers.

Sometimes resort (and cruise) entertainment can be a bit jaded. Circuit acts going through the motions with their gigs of tired material. But the Finolhu acts had a fresh vitality about them. All the buzz of someone pursuing their dreams and living them every day in paradise. And when they finally do hit the big time and get that headline act in Vegas, you can say you saw them in the original Circles of Sun in the Indian Ocean. 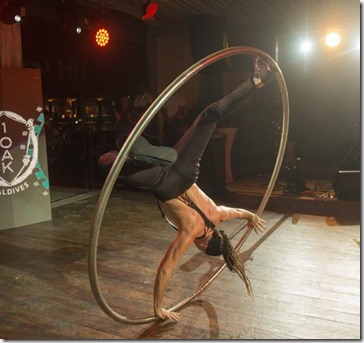 Posted in: Best of the Maldives \ Tagged: entertainment, Finolhu 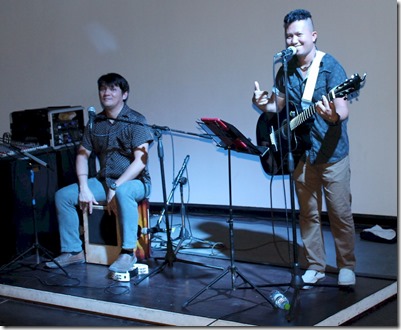 After a day of snorkelling, diving, exploring and soaking up the sun, Lori and I are usually ready to collapse under the stars after dinner. A number of resorts will feature entertainment in the evening and in many cases, the DJ or Boduberu is just too uninspiring to get us up onto our weary feet. And even if we can do, many of the resort bars and lounges have limited dance floor designed more for gentle swaying and bopping around the handbags. Lori and I both study ballroom and Latin dancing and we hadn’t found a resort where the music extended to such diverse genres and offered the room for really stretching out our heel leads and cha-cha-cha’s. Until we visited Sun Siyam Irufushi.

Their main bar, The Water’s Edge, boasts a 20m diameter dance floor with plenty of room to stretch out your dancing legs. Especially, since we had it to ourselves (well, until our ice breaking spurred several other couples to join in the romantic fun).

But the key to good dancing is good music and that’s what really got us going. The music led by Philippine duo “Intonation Band” (though I think they also go by the name “Desperado”). Not just a gigging band ushered in for the evening, but residents of Irufushi for 2 years. The duo consists of Henri and Rodelle (see photo above) who both play a range of instruments.

It’s not just the range of sounds, but the selection of songs. They will play virtually any request for you. They have an iPad app which allows them to download music and lyrics for an extensive library of favourites. We were able to get a cha-cha-cha, rumba, tango, waltz, even some jazz tunes (today is Jazz Day, by the way). The band was able to not just sight read the music very adeptly, but also sing along as well. The finale was Cat Stevens’ “How Can I Tell You” which is Lori’s “our song” (played at our wedding, etc.). Hard to imagine a more romantic finish to the evening dancing under the stars to your favourite song played live, in your favourite part of the world with your favourite person. Bravissimi!

Posted in: Best of the Maldives \ Tagged: entertainment, Irufushi, music 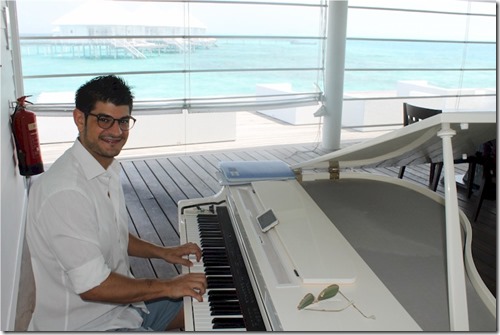 And the “Best of the Maldives” for “Piano Bar” goes to…<drum roll>… Athuruga and Thudufushi. “La La Land”, the story of a piano playing jazz musician Sebastian trying to bring Jazz to the fore had a bit of a problem at last night’s Oscars. No troubles, though, with Diamonds’ own Daniele (see above) bringing jazz and pop standards to your dinner playing at the overwater restaurants there. The live performance gave the music a more personal and intimate feel than piped in tracks, and the acoustic styles were soothing. You can enjoy his music over dinner or you are able to go to the restaurants for drinks.

See you in the Maldives.

I raise my glass to your glass dropping!

Best of the Maldives: Ballet – NIYAMA 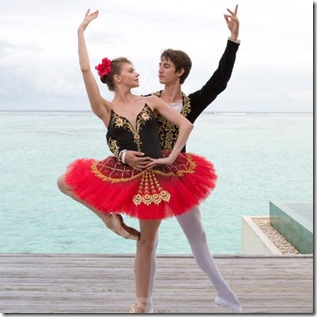 Most live entertainment in the Maldives is either rock DJ or romantic acoustic. Given the upper crust economic brackets of most of the Maldives’ guests, I always wondered if something a bit more sophisticated wouldn’t go amiss. Like opera or ballroom dancing. Well, NIYAMA has brought one of the most sublime arts to the land of ethereal beauty and sublime grace – ballet…

“Fluidity and strength take centre stage against a backdrop of Indian Ocean. Under sparkling stars and above the crystal waters of the Maldives, the Mariinsky Ballet’s First Soloist, Xander Parish, performs for PULSE by PER AQUUM. Accompanied by dancers and soloists of the Mariinsky, the movements of Scheherazade, Swan Lake, Giselle, Don Quixote and Carmen Suite come to life in a tidal swell. Guests at PER AQUUM Niyama will enjoy an exclusive performance on 21 August with an encore at PER AQUUM Huvafen Fushi on 23 August. Budding ballerinas and ballerinos will also have a once-in-a-lifetime chance to take centre stage themselves. Xander and his hand-picked ensemble, including Oksana Bondareva and Renata Shakirova, will be offering masterclasses at each resort during their visit.” 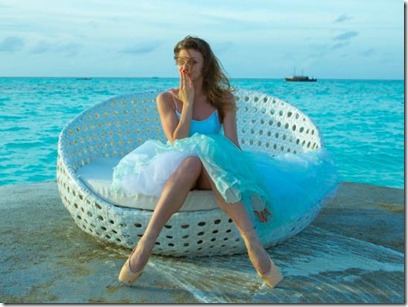 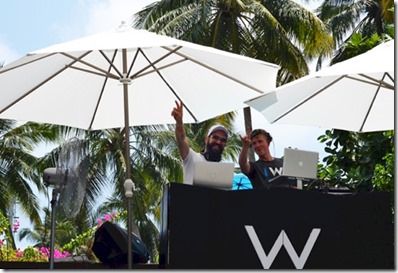 It’s not a “pool party” until someone shouts “kowabunga!” Or in the Maldives, “koWabunga”. As W Retreat’s Shockwave Pool Party at Wet Deck is where the water fun happens every Thursday from 1:00 – 4:00 pm. A full on frolic fest with DJs, cocktails, treats, noodle and other floats, bubble making machines, etc. My favourite is the armoury of water artillery (see bottom) provided for squirt gun fights! Guests have a few options from a party pass with 2 cocktails and BBQ ($65pp), or 2 glasses of champagne and BBQ ($78pp), or (for those in the total party spirit) unlimited champagne and BBQ ($160 pp). 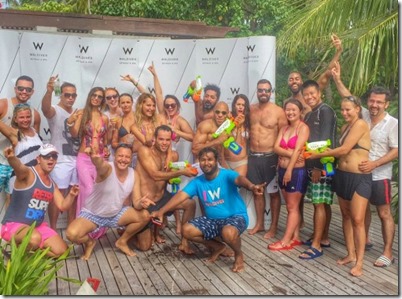 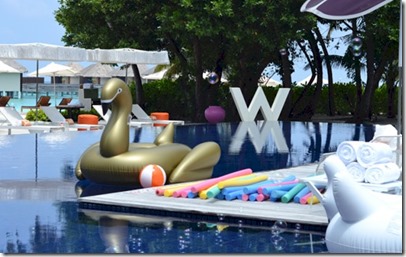 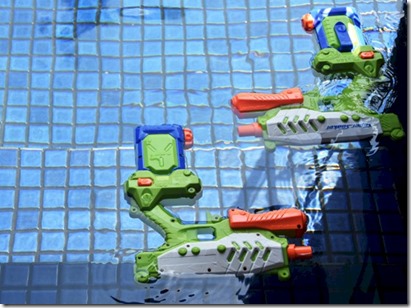