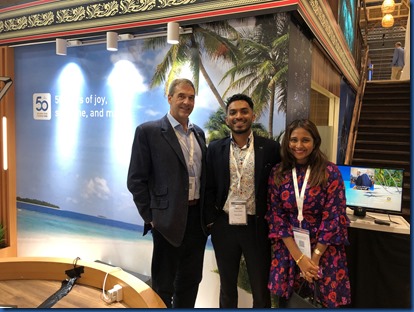 Yesterday, I enjoyed my annual pseudo-escape to the Maldives at London’s 2023 World Travel Market. Their booth is replete with images of the destination’s linen white beaches and tapestry of ocean blues and manned by a platoon of the Maldives’ resort leaders touting its alluring charms to agents, operators and media. I was able to reconnect with long time friends and connections as well as make new ones. In particular, I sat down and learned much more about Brennia Kottafaru, The Standard Huruvalhi, Outrigger Konotta, Movenpick Kuredhivaru, Rahaa and Baglioni (none of which I had ever visited).

The highlight of the event was meeting a contender for “newcomer of the year”, a resort I hadn’t even heard of – Oaga. Or “Oaga – Art Resort” to be precise. And actually, planned to be a 5-property complex built from terraformed reclamation in a North Male lagoon. Oaga is one of the most inspired concept properties I have come across for a while – “Maldivian Artistry”. Not just engaging a Maldivian artist to add some colourful touches to the property, but imbuing the entire DNA of the property with a visual aesthetic. Even their show swag was a piece of art from one of their resident artists (I got the one below done by Rahvehinn). I normally have to visit a resort to identify its truly distinctive touches, but just a short chat with the Oaga folks (including two of their founding directors – see photo above and special 360 photo provided by the Visit Maldives hosts of the booth) came up with a dozen “Best of the Maldives” pieces I could write about. They soft open later this month so keep an eye open. 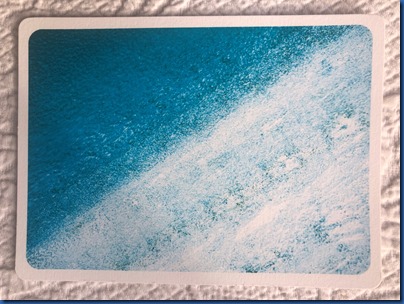