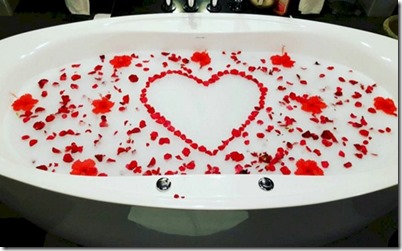 Happy Valentines Day sweethearts everywhere.  But especially in that global hotbed of romantic paradise, the Maldives

Get your clothes off for a hot and steamy, sensual delight, with a touch of perfume, bubbly, and flower petals. Yes, a romantic bubble bath. Here’s a not-so-dirty dozen of the best in the Maldives…

I’ve also added a “Maldives Tub Art” board to the Maldives Complete Pinterest so I can add more sexy suds as I find them. 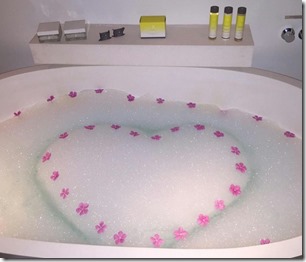 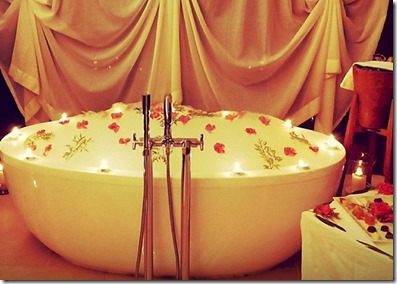 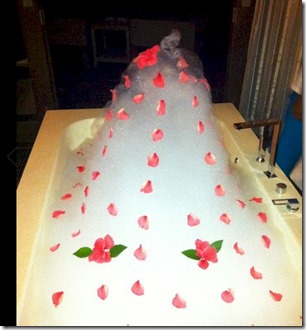 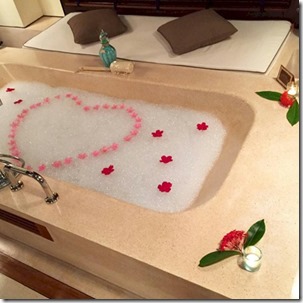 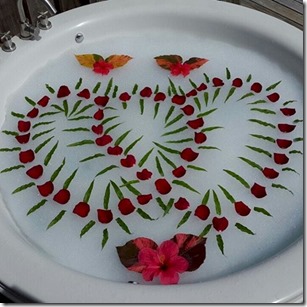 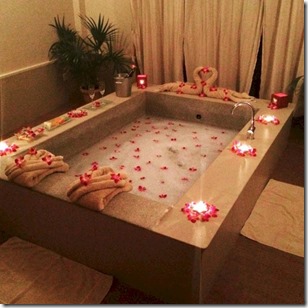 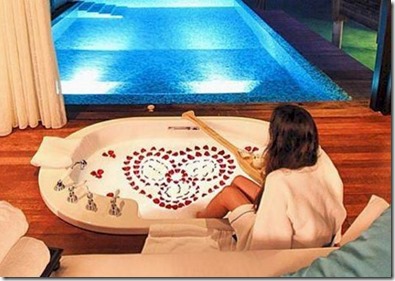 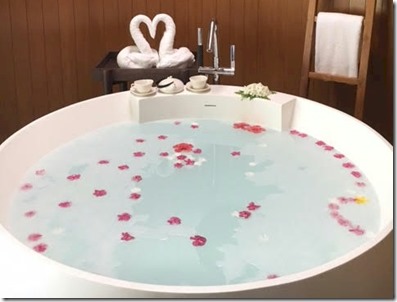 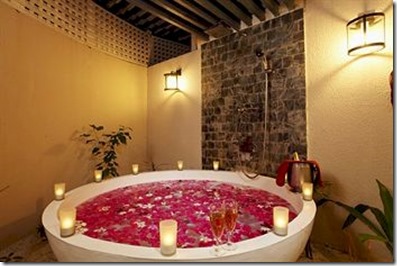 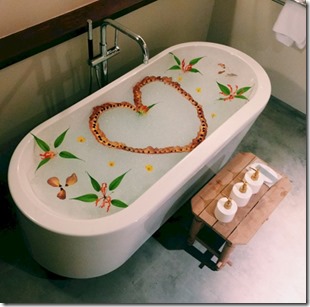 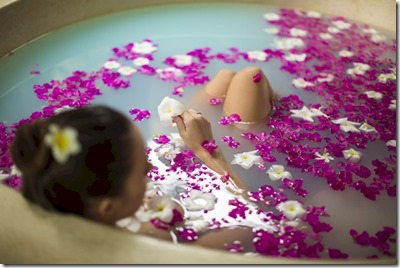 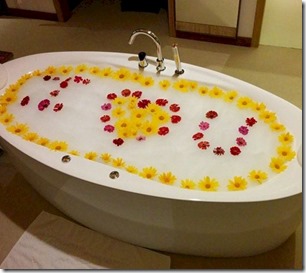 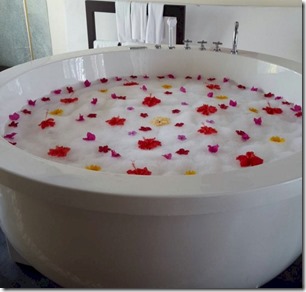 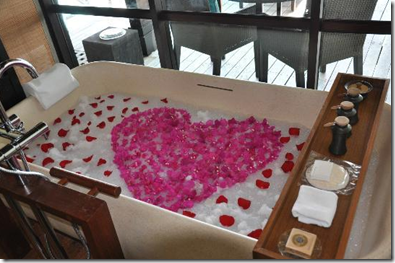 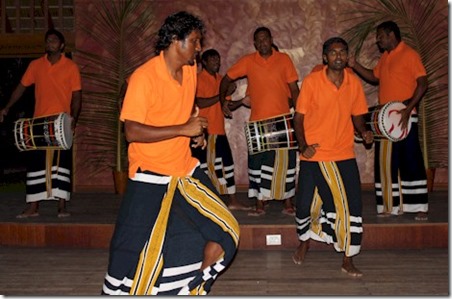 Today is Maldives National Day. A celebration of Maldivian independence from the Portuguese in 1573.

Most resorts regularly offer their guests a taste of Maldivian culture from local cuisine to some Boduberu drumming and dancing. We’ve sampled many of these and always delight in new discoveries about this enchanting land we visit every year. But Vakarufalhi’s “Cultural Expo” was a real revelation.

It was a true “Exposition” which started with an authoritative presentation on the history and culture. It added the obligatory Boduberu which was offered very tastefully and not overdone. But the climax was a sort of crafts fair with local women showing us broom making from stripped palm fronds, rope weaving from coconut husks, roof weaving from palm leaves, decorative weaving for clothes. They also had some traditional refreshments such as fresh coconut and smoking pipes. 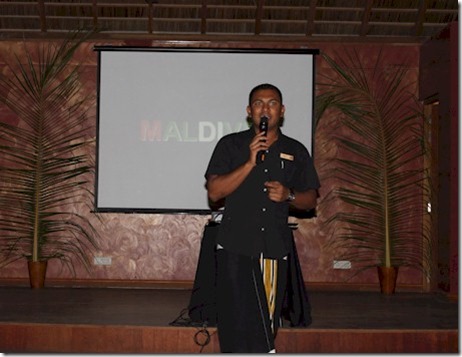 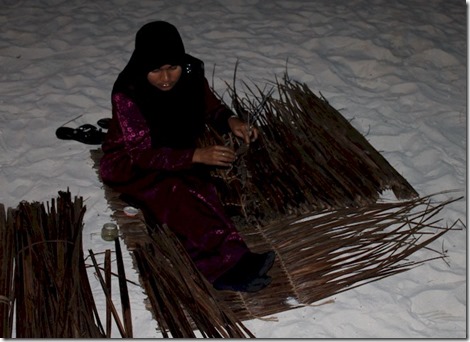 Posted in: Best of the Maldives \ Tagged: best of, culture, entertainment, Vakarufalhi

Best of the Maldives: Gelato – Vakarufalhi 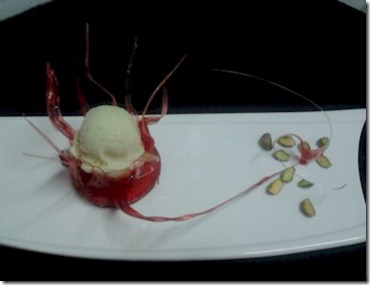 That’s one of the Lynn family catch phrases from our many visits to Italy. We always end up eating sumptuous feasts (especially when our friends host us for meals). But no matter how much pasta and pizza we have consumed, we always find a way to squeeze in a little (or more than a little) gelato.

The Italians certainly do have a flair for ice cream. My favourite ice cream parlour of all time is Toscanini’s in Kendall Square, Cambridge, Massachusetts with creative flavours like ‘GrapeNut Raisin’ and ‘Ginger Snap Molasses’.

The award-winning Italian chef Rizzoli Riccardo at Vakarufalhi plies a similar passion for creative creamy concoctions like the ‘Green Tea’ gelato (photo above). Other innovative flavours include ‘Sri Lankan Cinnamon’, as well as ‘Porcini Wakame’ ice cream with honey and ginger.

Always room for that!

Posted in: Best of the Maldives \ Tagged: best of, dining, ice cream, Vakarufalhi 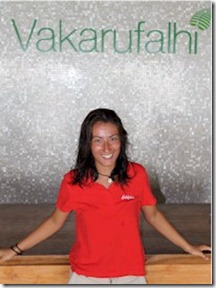 No matter how good you are at something, a local expert and guide is always a sound move.

My wife and I do most of our skiing (I snow board) with our best friends who happened to meet as ski instructors. We tag along to which ever of their favourite European slopes catches their fancy this season. Having such experts along transforms the experience. The stress is halved and the excitement is doubled. The stress is cut because you don’t have to worry about getting lost, or going somewhere over your capability. The excitement is doubled because they introduce you to places literally of the beaten path and point out things that you probably would have missed focusing on where you were going.

Those same slope benefits are the reason to grab a snorkel guide at a resort whenever you have the opportunity. My wife and I are advanced divers and have snorkelled over 100 times, but we still benefit from having a local expert show us around. In and among all those guided outings, the guides have all been superb. But we have never come across a guide quite so enthusiastic and proactive as Tania Gae Militello, the marine biologist at Vakaufalhi.

The fact that she holds daily routine guided excursions on the house reef is a key and relatively uncommon at resorts. Other resorts either have the marine biologist on demand or else they have periodic guided excursions. Her regular excursions mean that you can simply work it into your daily routine. You don’t have to feel self-conscious about asking for a guide as she is going anyway. She will also do special excursions to suit you for free as well (schedule permitting).

We took advantage of this ad hoc offer to do a sunrise snorkel (on the wise advice of TripAdvisor Destination Expert ActiveGirl) where we saw tons of sights. Lots of stuff we would have missed if it wasn’t for her trained eye as well as knowledge of the local seascape and knowing where the interesting critters tend to congregate.

One of the best examples is a loggerhead sea turtle named Camilla. She has a favourite resting space on the house reef drop-off ledge about 3 metres deep. Tania showed her to us. More importantly, without any provocation or disturbing her, Camilla popped out and came for a swim with our group when she saw that Tania had arrived. Camilla seemed to recognize Tania and seemed very comfortable around her (no, Camilla does not do any feeding of marine life whatsoever). As close to a guaranteed turtle sighting as you wil get.

As I mentioned at the top, a guide also allows you to push yourself further than you might. When we did our morning snorkel, Tania took us around the further house reef side…and a storm squall came in about 30 minutes into our venture. Normally, I would have been quite spooked being a good distance from shore with a dark, windy sky. But, Tania knew that we were strong swimmers and we were going with the current towards the jetty and reassured us that everything would be fine. When the squall (aka mini-monsoon) hit us, aside from some swells in the ocean and the tickle of rain on our back, the snorkel was as delightful as any. As a result, we were rewarded with some memorable sights we would have missed without her support.

She also took a number of videos and pictures on both of outings with us and loaded them onto a USB stick for us so we could have them.

Tania is passionate not just about the undersea world, but also about the snorkelling itself and makes it even more accessible and thrilling at Vakarufalhi.

It’s all about the people.

In Maldivian paradise, every resort has the same soothing sun, turquoise waters, vibrant sea life, swaying palms, and romantic sunsets. Nowadays, most resorts have spruced up their rooms so that they are comfortable and slick. On the food front, it’s hard to go too far wrong with the endless supply of fresh seafood as well as the range of resort staples. So where do you focus if you tick all the boxes and want to create a distinctive experience for guests? The people.

That was my impression after a quick stop in Vakarufalhi. For a long time, Vakaru has been mostly an Italian resort, it is now extending its availability to other markets across Europe and beyond. It is another rare beast avoiding the siren call of the ‘5 star’ as it is sticking with its 4+ star positioning and value pricing. It is a modest sized island, neither extremely small nor very large, for those looking for a balance in size criteria. Vakaru didn’t have many showy features that stood out and yet I still found myself feeling that I would readily recommend staying here.

On reflection, all of the little details that I most admired came back to certain people. This is not an observation exclusive to Vakaru as I have met so many distinctive and impressive people in the past few days and all my time in the Maldives, but at Vakaru it was really fundamental aspect to the resort punching above its weight class. I was toured around by Maldivian veteran Abdulla Saeed who had one of the most extensive pedigrees I have come across in the Maldives. He uses his extensive experience to refine the experience for all the customers (like making sure that the Boduberu drumming doesn’t go on too long and having different welcome drinks for different times of the day). Rizzoli Riccardo is a top flight Italian chef with a personality as big as his repertoire who makes sure that every meal is as savoury as a Tuscan feast (yes, homemade fresh pasta and gelato…no matter how much you have stuffed into yourself from the tempting buffet, there is always room for gelato). Tania Gae Militello, the marine biologist, is the most passionate snorkel guide I have ever met. She runs daily, free excursions on the extensive house reef and seems to be on a first name basis with all of the aquatic residents there. And the General Manager is meticulous about constant improvement. He grilled me more than any other manager this trip on what could be better, what worked well, how did things compare. After settling into the role in his first year, it is clear that he is scheming a number of new ideas and enhancements to give the island even more appeal and distinction.

An up and coming resort to keep an eye on. 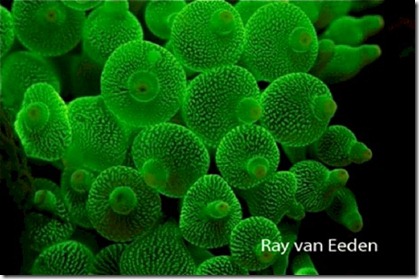 For an even closer investigation into reef life, state-of-the-art ‘fluro-diving’ has come to the Maldives.

Night dives shed a whole new light (or lack thereof) on the undersea world. Night dives never had much appeal to me because it seems to defeat the purpose of ‘seeing’ the underwater world. I always figured I could turn off all the lights in my bathroom, fill the tub and breathe through my snorkel and get pretty close to the same experience. But my more advanced diving buddy, Lori, assures me that night dives are so much more. A whole new world reveals itself in the dark hours many of which have their own tantilising illumination which you can only appreciate in the pitch black.

The Prodivers team at Kuredu, Komandoo and Vakarufalhi have taken this night time spectacle a step further by introducing ‘Fluro-diving’ to the Maldives…

“The Prodivers team, always on the lookout for new diving experiences, have launched yet another spectacular and unique underwater adventure! To boost our divers’ enjoyment and appreciation of the reef, we’ve recently introduced fluoro-diving! After exploring the trippy phenomenon and discovering which sites around Kuredu are the best to be dived with the newly acquired NightSea fluoro-sets, the well-kept secret of fluorescence night diving is now available to our divers. Experienced divers, not afraid of spooky, low-light conditions, can now intensify their night diving and sneak peek at the reef to find crazy green bubble anemones, burning red feather stars, freaky blue shrimps, brightly red scorpion fish, green glowing brain and mushroom corals and glowing green lizard fish. Fluorescent diving has so far been revealed only by 6 dive centers in the world. The Prodivers team are overwhelmed by seeing the reef in a new light, and as there is so much more to discover – don’t hesitate to join us!”

The whole concept smacks of underwater Crime Scene Investigation. Perhaps they should do an episode of ’CSI: Maldives’. 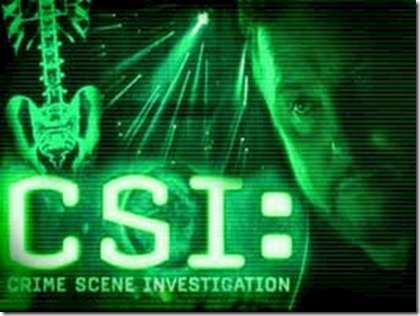