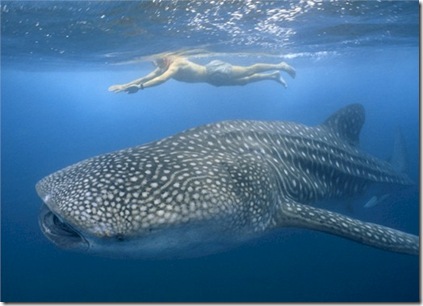 When our family went on safari in Kruger National Park, the various resorts used to brag about how rich their park was by referencing the ‘Big Five’…

The ‘Big 5’ represented the ‘main events’ on safari. Yes, the colourful birds, curious critters, adorable primates were all wonderful to behold, but these Big 5 had a certain cachet and thrill. It became a bit of a signature to a great safari to see all five.

That Big 5 tradition made me think that ‘snorkelling’ ought to have its own ‘Big 5’. Most snorkelling excursions are dubbed ‘Snorkel Safaris’ anyway. After a decade of snorkelling, there certainly are certain creatures that spark a real enthusiasm. An acid test of distinction is whether you shout out to perfect strangers swimming near by, ‘hey, check this out!’

But actually, on reflection, they break into two groups – treats and rarities. The ‘treats’ are the ones that you would pretty much hope or even expect to see at least one of on any good snorkel…but are still a special treat. The ‘rarities’ are the ones that one hardly ever sees snorkelling, but can especially if one seeks them out.

First the basic ‘treats’ that I would dub the ‘Little 5’. Most of these are fairly common in good snorkelling sites. For one reason or another they always bring a little smile and the dive camera comes out…

This list is a distinctly Indian Ocean / Maldives list. In the same way that the ‘Big 5’ was distinctly ‘African’. Tigers, orangatangs, and sloths would certainly figure into any one’s top aspirations in Asia jungles. Similarly, the dugongs of Australia, water snakes of Indonesia and seashores of Europe and America make for special occasions in those locales.