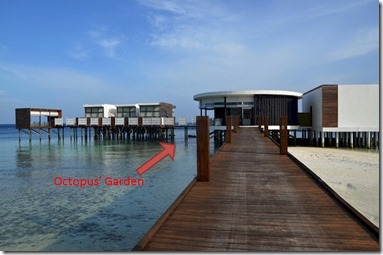 Probably the most elusive of the Snorkel Safari Big 5 to bag is the master disguise, the Octopus. My wife’s and my favourite sightings are octopus. We had spotted several on our dives, but hadn’t seen one on a resort house reef for over a decade when we one played hide-and-seek with us in the shallow lagoon of Coco Palm Dhuni Kolhu. So we were a bit sceptical when the Jumeirah Dhevanafushi staff were boasting about their ‘resident’ octopus. But they didn’t just say that some octopus could be regularly sighted around the island. They insisted that he could be reliably found at his favourite hovel just under the spa jetty (see photo). Mind you, don’t think you can just walk on the jetty and hope to see him. When we went looking for him on our snorkel outing, we swam right over him without seeing him. It wasn’t until we had turned around that we saw him peeking out of his rocky crevice.

And like the song, thanks to the jetty, his “garden” is indeed “in the shade”!