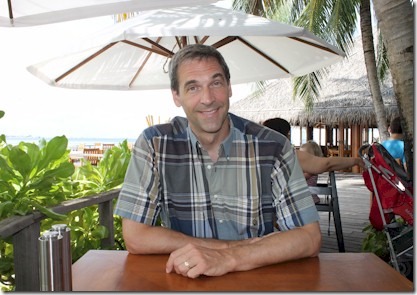 The newest old resort in the Maldives.

You’d think after 2 week long visits I would have finally all there is to see of a resort. Especially one you can walk from one side to the other in 7 minutes. But my final stop on the 2013 tour at Kurumba revealed as many new and exciting aspects as I had seen most of the week on my maiden visits.

I was hesistant to add Kurumba to the itinerary at first trying as I always want to gather as much new information as possible. I won’t say it’s a whole new resort, but it is a lot new – room refurbishments, restaurant overhaul, style upgrades. And simply the most ambitious and exciting recycling initiative in the country at the moment. Anyone bothered by the unpleasantness of Thilafushi would be well served to consider Kurumba’s pioneering work here (stay tuned for a big post on this work).

What wasn’t hard to convince me was to have another round of the lively house reef. I’ve been touting it as the most active house reef in terms of marine life that I have come across (but, hey, I’ve only snorkelled about 40 house reefs). Some skeptics were curious to see if this year I hit the same success. Well, actually not. Even more success! Not only is it the absolute shark bonanza of house reefs (we spotted 7), but we saw more of the ‘Big 5’ snorkelling. As logged on Snorkel Spotter, Lori and I also saw 2 lovely turtles and a huge sting ray. Not to mention the big schools of Sergent Major, Parrotfish, Bleu Striped Snappers, and a group of fluorescent squid passing by. There is no such thing as a sure thing (to see special marine life) in house reef snorkelling, but Kurumba is the closest thing there is to one. And finally, there were lots of signs of the corals coming back strongly with bits of blue, green and yellow tips scattered everywhere.

Kurumba is possibly the ‘Unsung Hero’ of resorts in the Maldives. Existing in the shadow the Maldives and of its own history produce mistaken preconceptions that it is too close to the built-up Male and it must be past it prime. But, Kurumba has been a trail blazer since it first pioneered the concept of a Maldiviain resort and remains in tune with the modern Maldives. The ancient Buddhist saying is that you can never step in the same river twice. That is certainly the case for the Maldives and even more so for the moving and shaking Kurumba. Don’t make the mistake of overlooking it when considering an exceptional Maldives resort.