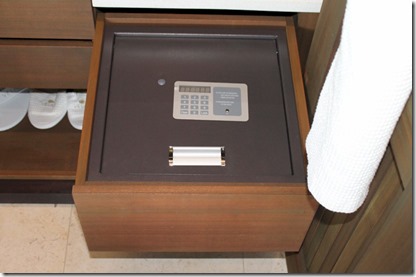 Velaa puts the “safe” into “safety”. With the largest room safe we have come across in the Maldives. About 4 times the size of the conventional closet shelf safe.

In all our nearly 20 years of travelling to the Maldives, we have never lost anything in a room. I think the room staff there are amongst the most virtuous in the world. But that doesn’t mean you shouldn’t put your valuables in a safe. The biggest threat that a safe protects you against is…yourself. Being in a completely different environment and routine, it is quite easy to misplace something. Especially if you are transferring to multiple properties during your holiday. Putting all the important stuff – passports, wallets and cash, jewellery, maybe special electronics – imposes a discipline on you to put all your eggs in one basket and watch that basket. There is quite a risk that you just put something in the wrong place. And then before you know it your idyllic get-away is ruined wondering if someone has walked off with it. Simply remove all doubt and a lot of the risk by methodically locking stuff in the safe. And if you have lots of stuff, consider a stay a Velaa.

Posted in: Best of the Maldives \ Tagged: safety, Velaa, villa 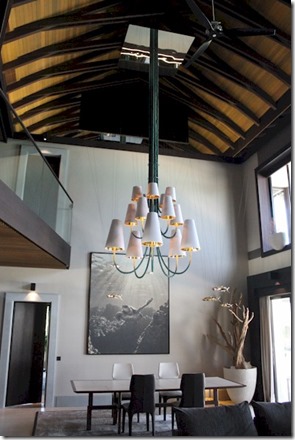 I guess you could say that Velaa’s Private Residence would have the ‘second’ highest ceiling (that is after Soneva Jani’s infinitely high one). But in the universe of conventionally topped villas, Velaa’s Private Residence headroom is galaxy-sized in its own right. The vaulted ceiling extends three stories up forming a cathedral-like nave quite possibly the largest indoor space on a Maldives resort. The second floor balcony lines one side giving another perspective on this vast lagoon of room volume. 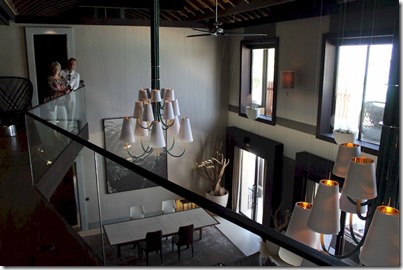 Best of the Maldives: Elevator – Velaa 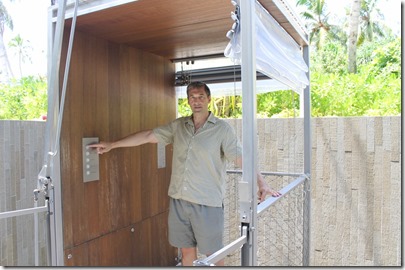 If the treetops aren’t high enough for you, then Velaa tower is the palm-topping pinnacle. Yes, I’ve already posted about Tavaru, but I neglected to mention that getting to the top is half the fun. The elevator is completely open so you get a captivating bird’s eye view as you ascend. 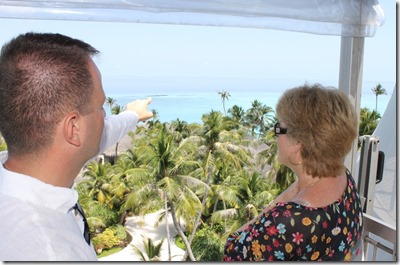 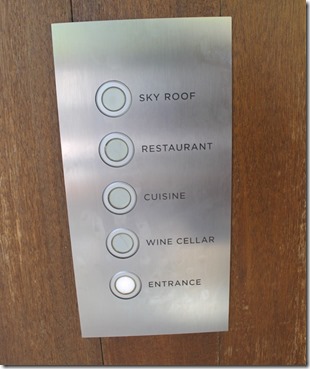 Posted in: Best of the Maldives \ Tagged: Velaa, view 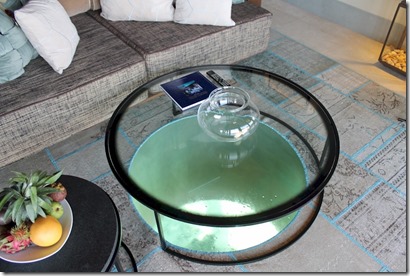 And if there was a “Look THROUGH Circle Day”, this gem at Velaa resort would have few peers…or many peers depending, literally, on how you look at it.

Posted in: Best of the Maldives \ Tagged: glass, Velaa 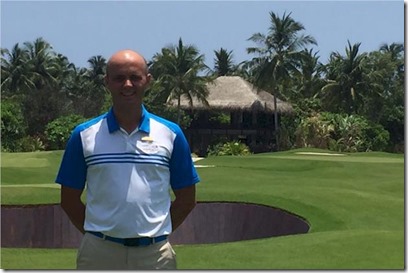 If you need a hand following you around the golf course with your game, Velaa resort offers its very own resident golf pro – Christopher Snape. He can wield Velaa’s armamentarium of space-age analytical tools or just join you for a round.

Posted in: Best of the Maldives \ Tagged: golf, staff, Velaa 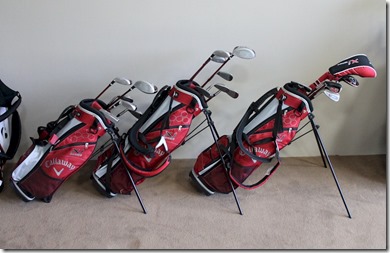 Not only do the Olympics introduce you to some sports you might not have seen regularly on TV, but the Games themselves are introducing new sports keeping up with the athletic trends around the world. One of the new sports is Golf. Well, not totally new. It was a part of the Ganes back in 1904, but dropped ever since. Assuming it will stick around a bit longer this time, you have the chance to get junior or lil miss ready for Paris/Rome/Budpest/LA 2024 at Velaa’s elite links. Maybe a lil’ course for the lil’uns, but make no mistake…these are no toys. Velaa kits even the little ones out with top of the line Callaway equipment (see above). 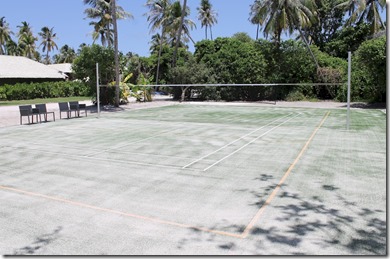 The Olympics give the lower profile sports their moment in the global, primetime spotlight. Sports like badminton, typically relegated to the sports center or back yard set up. But Velaa resort provides a pro-quality badminton outdoor venue. Most outdoor courts are on hard sand or asphalt. Their court has top of the line astro-turf which provides great foot grip, a softer surface which is easier on the joints, and a cooler surface in the tropical sun. But to get the ‘grass’ just the right height, the court is sprinkled with soft sand imported from Europe. And the court is properly measured and lined for singles or doubles matches. Olympic-standard badminton for fun-in-the-sun volleying.

Posted in: Best of the Maldives \ Tagged: sport, Velaa 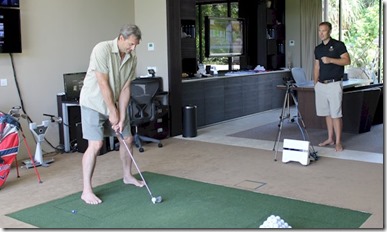 Golf seasons kicks off with the US Open this week. Lori and I have gotten our clubs out this week and I shot my best ever round. If I want to improve further, it seems like the modern game has become as much science as any art or athleticism. Weight training, nutritionists, sports psychologists. And an entire armamentarium of gadgets to dissect every nuance.

No surprises that the titan of the tees in the Maldives, Velaa resort, has some of the most space age technology available to help with your game. Among their tools is a Science and Motion (SAM) Putt Lab, but the centrepiece is their Flight Scope Doppler Radar. A $50,000 piece of kit. Velaa Golf Pro Frank Murray took me through a few pointers on my swing during my Velaa visit see below) so hats off to him and his armoury or arm analysis for whatever contribution he made to my progress. 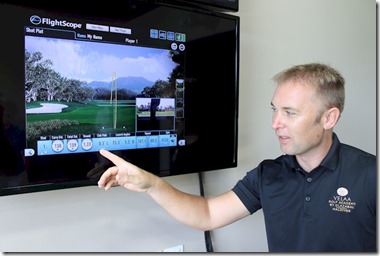 When you think vast wine collections, you think of descending into a dusky basement. But the “wine cellar” is a bit of a throw-back to times before climate control. When under ground was the most naturally moderate and constant temperature one could find. But with today’s modern air cooling and UV filtering glass, you can put your prized vintages about anywhere.

I was first struck by Coco Bodu Hithi who put their wine collection unconventionally *above* their restaurant. It meant they could hold wine tastings with gorgeous ocean views instead of sequestered in some hovel.

But Velaa went even further above that with their “cellar” propped up above the tree in their signature Tavaru Tower. 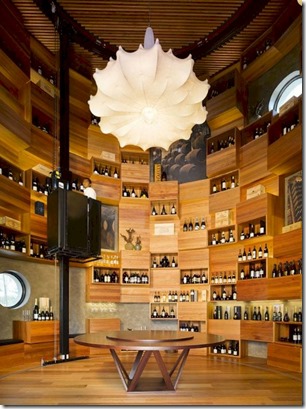 Posted in: Best of the Maldives \ Tagged: Velaa, wine

Q: What is the best way increase the odds of sea turtle hatchlings surviving?
A: Put them in nurseries to help them grow stronger?
Q: Buzzzzzz! Nope. The fairly common practice of collecting hatchlings and protecting them by nurturing them in special nursery pools turns out to cause long term problems for the turtles.

World Turtle Day today is the opportunity “to bring attention to, and increase knowledge of and respect for, turtles and tortoises, and encourage human action to help them survive and thrive”. Most people know about the dangers of plastic refuse to turtles (they get caught in six-pack rings and mistake plastic bags for jelly fish which they try to eat). But even those keen to help the critters are less aware of the issues with well-intended turtle nurseries.

The nursery misconception stems from the “numbers game”. As Marine Biologists Tess Moriarty and Dee Bello (who kindly provided most of the research for this piece) from Velaa resort (THE Turtle resort – “Velaa” means “Turtle” in Dhivehi) describes, “For turtles it is always a numbers game, they have many threats to their survival and it is commonly known that many do not make it to adulthood.” The concept of nurseries is to allow the hatchlings to grow to a more significant size where much fewer predators would be able to manage eating them.

Unfortunately, turtle nurseries have a number of problems for the turtles they are trying to help…

So what CAN be done to help these endangered little tykes? Dee offers up the following…

Of course, all these measures are focused on the young turtles. But even when they get all grown up, they still could use our help in surviving (especially since human actions cause many of the adult hazards)…