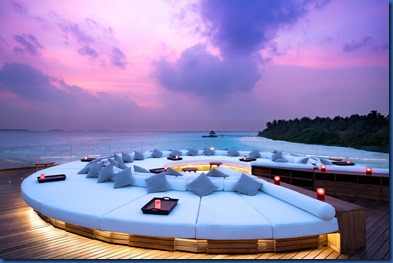 We have been spending many an evening recently lying flat on our backs star-gazing especially watching the always dramatic mid-August Perseids meteor shower (the biggest meteor shower of the year). It is such a special occasion that we blow up our air mattress and put it out on the lawn with pillows and a duvet so we will be comfy in the cool English night. We recently returned from a camping stay-cation with friends on the south coast of the UK (the closest we could come to a seaside surrogate to our annual Maldives visit) and introduced them to the super supine approach to contemplating the celestial firmament.

In the spirit of “everything is better in the Maldives”, Anantara Kihavah has installed the ultimate star gazing loungers atop their suitably named “Sky” lounge (also suitable for sunsets and ocean vistas). If only I could find someone to serve me tropical cocktails in my backyard.

“I am tasting stars” – Dom Perignon

Now you can taste Dom Perignon among the stars. On Anantara Kihavah’s new rooftop observatory and bar:

Kihavah has extended the ultimate bottom-to-top vista to the heavens now including the most exquisite wines to accompany every concourse.  And even if you have cloudy night, you can enjoy your sparkling wines under a sparkling firmament in the bar with a luminous ceiling display of constellations (see photo at bottom). 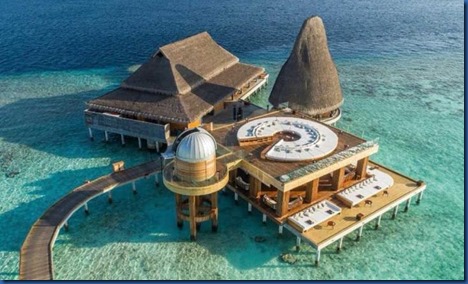 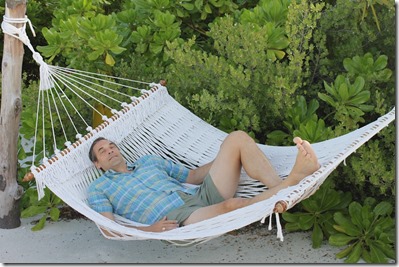 Kihavah King of the Swingers for Jungle VIPs.

I was particularly impressed during my stay at Anantara Kihavah that every villa was kitted out with a high quality hammock. Most resorts I have visited have communal pendulous pallets scattered across the resort. But also each villa deck has a sofa swings (see directly below).

Communal swings do abound throughout the resort with such exceptional models as their “best of” pool swing (see second below). And they even have the increasingly de rigeur lagoon swing (see bottom). 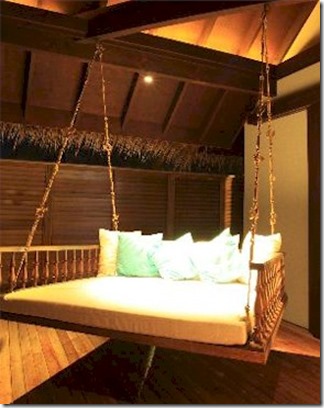 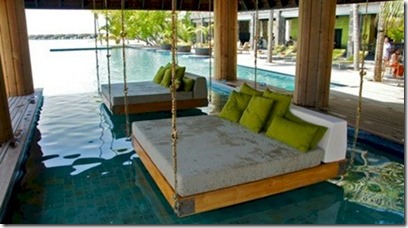 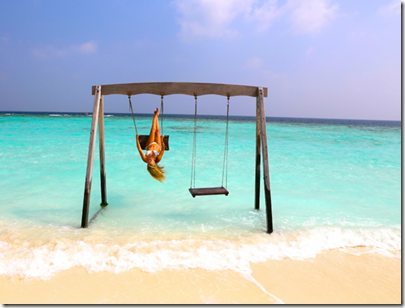 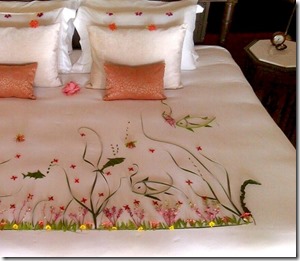 I’ve been lauding the exquisite practice of bed decorating since the outset of this blog when the craft mostly consisted of carefully placed flower petals. Over the years, I’ve amassed a fair collection of exquisite examples (features regularly on the Maldives Complete Pinterest board as well as various distinctive examples). And the mattress masterpieces have evolved to increasing sophistication and diversity. Today’s feature is a particularly artistic creation by Anantara Kihavah Villas (thanks Paola) that I thought was particularly apt for World Oceans Day today.

Now that is a vibrant ocean bed.

Posted in: Best of the Maldives \ Tagged: Anantara Kihavah, decor 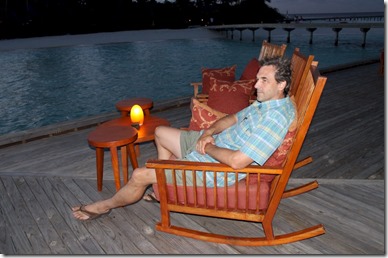 Lapping waves, swaying palm trees, ocean breezes. There is something soothingly relaxing about gentle movement. Which is why rocking chairs sort of epitomise lazy summer days. Our family’s most prevalent activity at our beach house is sitting on the back deck in rocking chairs looking over the intercoastal waterway (North Carolina). Increasingly, you will see rockers that are just as popular as the coin-op massage chairs in airport terminal for de-stressing during your travels.

Anantara Kihavah embraces the rocking vibe with a number of especially comfortable models set out at its Sea, Salt, Sky over-water restaurant collection. The chairs have nice deep seat, especially plush cushions and 2 pillows so you can rest your head against the tall back of the chair. 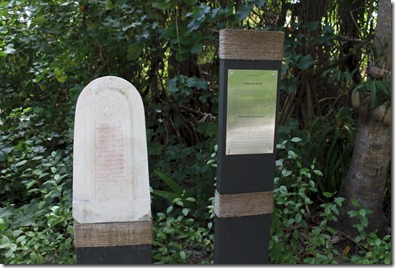 “Water, water everywhere, but not a drop to drink…” – The Rime of the Ancient Mariner

World Water Day today celebrates the precious commodity that is water. The magic elixir that makes our ‘blue planet’ teeming with life.

When a human being is left without food, shelter and any resources, it will die first from lack of water. One doesn’t necessarily think of the Maldives as a desert of water and yet it is probably as a precious here as anywhere on the planet. The vast majority of the county’s water supply has to come from desalination. Some rain water does fall on the land and get captured by natural aquifers. But modern Maldivian society long ago outstretched the capacity of these natural resources. You can still find these water relics around standing testimony to a society that cherished many precious natural resources not least of which was the water that surrounded it.

One of the best examples on a resort island of the old school water supply is the ancient well on Anantara Kihavah. The resort has reserved the site and put up a special information plaque for visitors…

“During the 16th century traditional Maldivian methods to obtain fresh water on uninhabited rural islands including digging a hloe in the ground by hand. This method was limited to suitable types of ground only, such as clay, sand, gravel and mixed soil where only small boulders were found in the ground.”

Adjacent to the well is another related memorial to antiquity, the “Kihavah Gravestone”…

“According to the script on the Kihavah gravestone it dates back to the early 18th century and would have been crafted locally during the reign of Sultan Ibrahim Iskandhar. The stone offers a glimpse into this island nation’s history during a time when such beautiful coral carvings were typical. Though uninhabited until recently, Kihavah Huravalhi Island would have been visited by islanders from the neighbouring islands and atolls to collect fresh drinking water from the well, wood and palm trees leaves for use in everyday Maldivian life, as well as to harvest the Kui Ruh palm trees for young coconuts. Kihavah means ‘young coconut’. In addition, the tranquil isolation of the island provided an ideal sanctuary in which to cleanse the body. During one such visit to take a bath. Ms. Aiminaa Faami passed away. She was buried where she died, in accordance with the customary practice at the time. The gravestone marks her death as 1227 in the Chinese Lunar Calendar.” 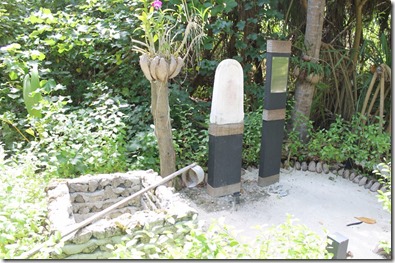 Posted in: Best of the Maldives \ Tagged: Anantara Kihavah 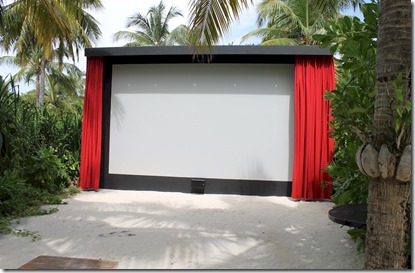 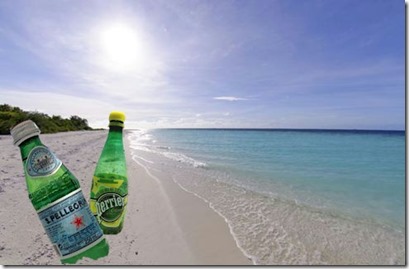 If you prefer your drinks “of” water rather than “on” water, then Anantara Kihavah Villas offers the most diverse party of international brands to choose from. Kihavah has its own water menu which includes…

Posted in: Best of the Maldives \ Tagged: Anantara Kihavah, best of, drink, water 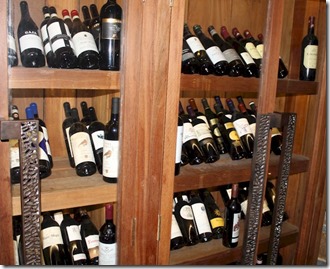 The Maldives oceans harbour treasures of all sorts. The vibrant house reef of Anantara Kihavah Villas hosts a trove of colourful gems from sparkling beauties to full-bodied crimson rarities. And you don’t need to get wet to view these treats. As they are found in the world’s only underwater wine collection. En route to the Kihavah underwater dining and function area, the resort keeps its finest wines shielded from sunlight and temperature variations in its unique cellar. Sort of a connoisseur’s version of a Marine Protected Area. 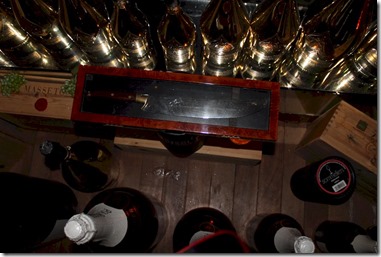 When she (or he) says ‘yes’ it’s time to crack open a bottle of bubbly to celebrate. And Anantara Kihavah Villas own underwater wine cellar offers that literally cracking option with its fizz. For an action demo of the technique, check out the video below.

Posted in: Best of the Maldives \ Tagged: Anantara Kihavah, best of, champagne, wine