QI: Octopi in the Blue Yonder

QI: How does an octopus smell?
A: Depends if he’s had cabbage chilli for dinner (ba-dum-dum). *BUZZ*.
A: With its nose?
QI: *BUZZ* As this Harvard researcher determined, and like so many other activities in the octopus’ fascinating life, with its suckers (“Touch and taste? It’s all in the suckers”)

Happy Octopus Day! If an octopus seems otherworldly with all of these bizarre qualities, then maybe it more so than you realized according to Big Think – “Octopus-like creatures inhabit Jupiter’s moon, claims space scientist” With the Maldives otherworldly’ aquatic vistas, snorkeling with an octopus might be the closest thing you can get to experiencing an alien encounter in the zero gravity of space. 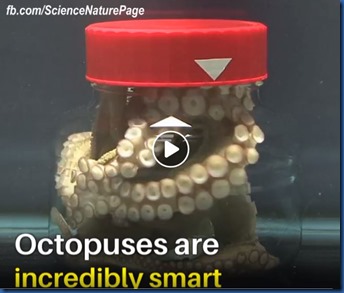 The octopus’ abilities seem downright otherworldly. In fact, a number of scientists writing in the Progress in Biophysics and Molecular Biology have proposed literally that octopuses come from another planet through a process called “panspermia” where “microbes, viruses and even tiny life forms like the tardigrade might travel dormant from space rock to space rock via collisions, eventually making their way to new planets” (though the consensus in the marine biology community is that such a conjecture is “fanciful”).

But sometimes truth is stranger than fiction and the actual mechanism for many of the octopus’ extraordinary capabilities has to do with maybe its strangest trick of all – changing its own genetic material. Scientific American’s article “Curiouser and Curiouser–Octopus’s Evolution Is Even Stranger Than Thought” described the bizarre genetic sleight of hand of the octopus…

For a stunning example of self-camouflage, beyond the colour and even texture changing trickery of their skin, check out Blue Planet’s piece on their sub-aquatic sartorial skills…

Posted in: Other \ Tagged: octopus 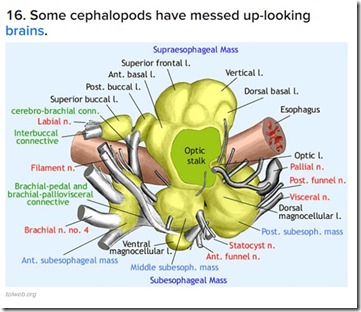 The octopus’ Cephalopod cousin, the cuttlefish, is no less intriguing. Itself a clever chappie, they have one of the highest proportions of brain size to body size of all invertebrates. But all the more crazy is that the brain itself is shaped like a donut (a bit of a messed up donut) and the esophagus passes straight through the hole.  They must really get serious brain freeze when they eat ice cream too fast!

Posted in: Other \ Tagged: ocean, octopus 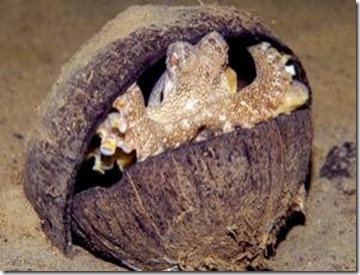