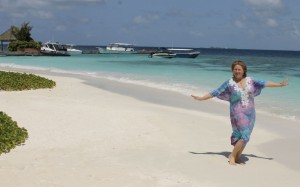 Kandolhu is a great example of building on your strengths. With very little real estate to play with, the resort shuns trying to pack in facilities and amenities. Instead, it amplifies the “palm tree and plot of sand” idyllic existence that makes the Maldives so unique in the first place.

Part of this deserted island aesthetic is a pervasive quiet. The intra-atoll island sits protected from big ocean currents at the atoll edge and its own distinctive reef surrounds the island with a strip of shallows that further buffer the water. So the only waves hitting the beach are tiny laps of water tickling the shore’s edge with more of a trickle than a crash. The resort preserves this peace and calm by not playing music in the common areas or even offering entertainment in the evenings. While they do have a water sports centre, all motorised activity is done at a separate deserted island (Merenfenfushi) over a mile away that guests are taken to.

Even with careful selectivity of what’s on offer (eg. no pool, no entertainment, no tennis courts, no golf courses) the resort uses every trick in its book to make the most of its precious [real estate]. The rooms are exquisitely designed with a simple contemporary style. Some of the rooms extend upwards as duplexes to exploit the most of each square metre. Many resorts this size would simply have one restaurant, but Kandolhu has cleverly carved out several different eateries by keeping them small and intimate. Like a collection of tropical pop-ups.

Another natural feature that does amplify the scale of Kandolhu is its reef. Renowned as one of the best in the Maldives, its greatest strength is its expansive layout in such a tiny area. Lori and I swam completely around the island in less than an hour. You can easily access it from one of two jetty jump-in points. But the 50 meter shallows which lead to it are also packed with coral and creatures to explore endlessly. The drama and scale of the reef comes with its dramatic drop-off. A sheer plunge of 30 meters in places.

Kandolhu has long been renowned for some of the densest, most vibrant coral in the Maldives. And with more coral on hand, it has been hit like all of the reefs in the Maldives by the triple whammy of rising sea temperatures, the added wallop of this yearís El Nino, with attacks from Crown of Thorn Starfish (COTS) to top it all off. The resort responded aggressively to defend the reef from COTS and they seem to have won the battle as we didnít see a single one during our snorkel. Still, it will be a little time before the coral recovers to its former glory.

But the coral isnt the only aspect of the reef which makes it such an irresistible draw.  “Kandolhu” must be some sort of Maldivian dialect for“Kingdom of Turtles”. The reef is crawling with them. We saw them every few minutes. A total of six during our semi-circumnavigation of the island. Neighbouring resorts occasionally bring guests to Kandolhu to see this terrapin spectacle.

If Kandolhu was a celebrity beauty, like the parade who are drawn here from around the world, she would be Eva Longoria…petite charm, elegance and stylish beauty with a dramatic impact and personality.