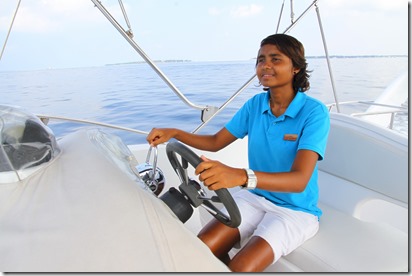 International Women’s Day today celebrates the inspirational achievements of women around the world. One such woman is Aishath Rizuna “Rizu”, the Maldive’s first female boat captain trained and appointed by Kurumba…

Rizu herself comes from a line of strong and active women. Her mother and grandmother are very practical and very sporty. Her mother fixes electrical issues and out swam all the boys while her grandmother still climbs trees…

“From her background, Rizu was born and raised in Funadhoo, Shariyani Atoll. Her father is a fisherman so Rizu has sweet memories about the time when her father taught her how to swim, snorkel and fish in a traditional Dhoni boat. At the very young age of four, Rizu’s father taught her how to drive a small boat, and by the time she was a teenager she was selling small boats in the lagoon of Funadhoo. Rizu’s father (Mohamed Nazim) curiously also worked in Kurumba at a young age thirty years ago and has been a great support to Rizu’s evolving career. We are delighted with the support of our twelve male Captains, who certainly gave her all the necessary help needed for her practical training as well as her theory course. Rizu is still developing her skills and knowledge of the Maldivian oceans, which will take some time. Whilst she will continue her role as Majaa Recreation Supervisor, these additional skills can be used in the future from time to time when guests are looking for a female crew.”

Maldives Complete had the opportunity for an exclusive interview with Rizu. Special thanks to good friend and fellow blogger Eileen Brown who helped with the questions. Eileen herself was the first female to be employed as a Deck Cadet in shell Tankers (UK) Ltd and is currently one of the leading promoters of women in the UK technology sector…

One Thought on “Best of the Maldives: Boat Captain – Kurumba”