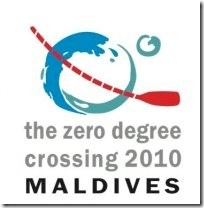 Small world. My other water-based pre-occupation (besides Maldives Complete) is coaching and supporting the sport of rowing in the UK for my local school, Sir William Borlase Grammar School, So it didn’t take many degrees of separation to hook up with neighbours down the road who were organising the inspiring Zero Degree Crossing 2010 project in the Maldives.

The area is referred to logically enough as the ‘Equatorial Channel’ and the organiser, Guin Batten, is a bit of an authority on ocean channels. The British Olympic silver medallist holds the record for a solo crossing of this very channel as well as for solo crossing the English Channel.

“The aim, says Batten, “was to trash my record for the single crossing, in a quad (four rowers, one coxswain).” “Unfortunately the weather against us. We started quickly, and might have managed it in 5.5 hours, but we were not fast enough for currents and it began to look like it would take us 15 hours – which meant the support vessel was going to run out of fuel,” she says. The team had trained for an endurance slog, but the brief window in the weather had closed and conditions rapidly began to deteriorate and the attempt was reluctantly called off after three hours.”

While disappointing, the result was not a loss because their venture had many more objectives than just a gruesomely ambitious excursion. First, they succeeded in bringing Maldives into the sport of rowing worldwide as the country because the 131st member of the International Rowing Federation (FISA) which officially brings another official sport to the country. Yet another emerging activity one can partake in on the Maldives placid waters (within the atolls though these folks ventured into the choppier area outside the protected lagoons).

It turns out that rowing has a proud, but dormant tradition in the Maldivian culture (no surprise in a land of 1200 islands). The Adaraan Huduranfushi GM Asim Mohamed was telling me all about this subject during my stay.  Traditional rowing was referred to as “Kura Fali” and was similar to ‘dragon boat’ racing in that the boat was powered by people on either side with paddles synchronised in the stroke by a drummer at the front. Cultural shows often put on by local villagers at Maldives resorts often feature a drumming exhibition which portrays this tradition. Unfortunately, not a single ‘Kura Fali’ boat remains in tact.

The Zero Degree Crossing team spent much of their visit introducing some of the latest equipment and techniques for rowing to various residents for whom the activity represents not only a competitive pursuit as a sport, but also a basic form of transport.

The whole undertaking was a massive logistical effort with help coming from many corners. Not least of which was the Alila Villas Hadahaa resort which hosted them for their project this past week and are looking to get more involved with the activity and sport going forward. 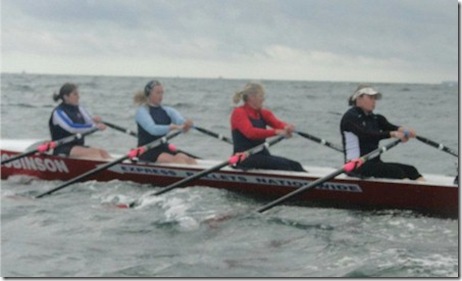