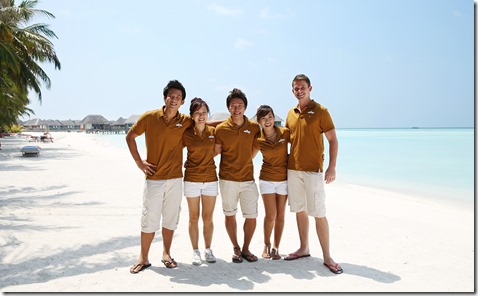 In my top ten FAQs is ‘what best resort for singles?’ These visitors are not looking for some sort of groovy ‘hook up’ resort. Rather, they simply just don’t want to feel all self-conscious being a singleton in the land of dewy-eyed honeymooners and other romantic holidayers. More catering for this segment was listed in one of my first “Haven’t Seen Yet” pieces. This segment is significant and growing. People get married later, relationships last fewer years, and older people lose their partners through passing. These guests just would like to (a) not be jonny-no-mates, and (b) not pay big premiums for being alone.

As it happens, while touring Club Med Finolhu Villas, we stopped a probably the best resort I have come across is Club Med Kani. Despite their special offerings for families and honeymooners, they also cater to singles specifically. They just cater to everyone! Here are some of the things they have put in place…

Literally, come ‘one’ and all…

One Thought on “Best of the Maldives: Singles – Club Med Kani”