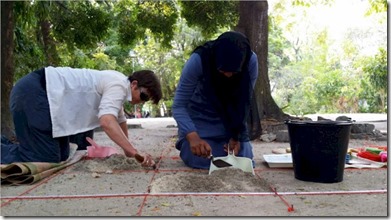 Today the Maldives is a billionaire’s playground that attracts those with money from around the world. But in the earliest days of the world’s history, the Maldives might very well have been the source of money itself.

That is one of the areas being researched by Anne Haour and her archaeological team out of the University of East Anglia. The project will be going into 2018 and I will be covering parts of it here as they become available (you can also follow Haour’s own blog “Crossroad of Empires”.

Included in Haour’s literally ground-breaking work, is one of her team members, Shiura Jaufar, who is the Maldives’ ploughing new ground as the country’s first archaeologist. In another exclusive interview, Maldives Complete caught up with Jaufar to do a bit of its own digging into her world of ancient mysteries…

1. How did you get interested in archaeology?
I have always wanted to become an archaeologist since the age of 9 upon discovering an article about an archaeological discovery in the local newspaper. Back then (and even now) people often used to ask kids about their ambition when they grow up and nothing else interested me until I saw this certain article. It astounded me to find out that there was a job where you could actually dig and discover things that dated back to thousands and millions of years. I guess I found out it too interesting and exciting to pursue another career.

2. What is your current research project?
Currently I am doing a PhD studentship in the University of East Anglia where I look at the pottery found in Maldives. For this, I have carried out archaeological test excavations in different regions of Maldives with the help of my supervisor Dr. Anne Haour and Post-doctorate researcher Dr. Annalisa Christie and yielded thousands of potsherds in order to better understand the role the Maldives played in the ancient Indian Ocean trade network. Maldives played a pivotal role in this trade system and pottery becomes a rather important element here since it is not known of any production centers in Maldives for pottery and so it is assumed that all pots were imported from neighboring countries such as India and Sri Lanka as well as China. My key focus will be to study these pots to produce a typology among various other information that can be used to better understand the nature of this important trade network.

3. Where did the ancient pots come from?
From what I have researched, there are no mention and no visible traces of pottery production in Maldives and so until proven otherwise, the current assumption is that the ancient Maldivians did not make pots but imported them adding to this the absence of clay in Maldives. It is said that Maldives imported a lot of glazed ware from China, as well as vessels (both glazed and unglazed) from the neighboring countries possibly India and Sri Lanka. This is also part of my current thesis to find similar comparisons within the South Asian region.

5. What is the most difficult part of your work?
Honestly, becoming an archaeologist itself has been a huge challenge itself considering this is a very new discipline in the Maldives and also since I am a woman. I guess the most difficult part of being an archaeologist is that there’s very limited scope for this field in the Maldives. The opportunities are scarce in all aspects of the field like lack of financial support, lack of awareness among locals, lack of expertise etc.

6. What antiquity in the world would you most like to go visit?
I am a huge follower of Egyptology and so I have always dreamt of visiting the Egyptian pyramids, their elaborate tombs and the mummies. Alhamdhulillah, I was blessed to see them not so long ago 🙂 I would also love to visit the ruins at Petra in Jordan and the South American sites such as the Mayan ruins of Chichen Itza in Mexico and the Incan site of Machu Picchu in Peru.

7. What is the most unusual or curious fact you know about the ancient history of the Maldives?
I find it rather intriguing to know that not only we have archaeology underground but underwater as well, i.e. shipwrecks and such. I think our underwater sites have as much potential for the better understanding of the Maldivian archaeology and heritage. There are ships under our waters from various parts of the world with various different goods and stories buried along with them and what strikes me most is that no archaeological or heritage related work has been done on these sites yet.

Jaufar travelling with her planning frame used for doing plan drawings of the site. 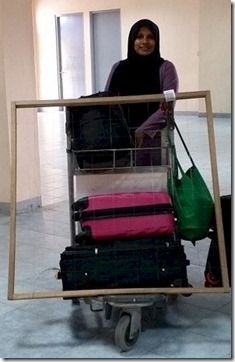 3 Thoughts on “Best of the Maldives: Maldivian Archaeologist – Shiura Jaufar”