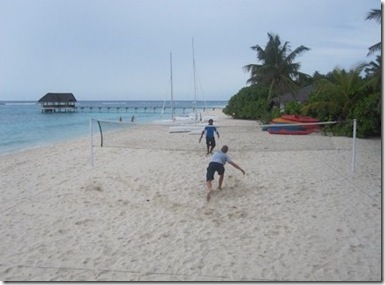 While perhaps the most famous ‘beach’ sport (and the only one of Olympic standing), Beach Volleyball is not the only ‘beach’ game in town. In fact, there are so many, that the Maldives was just this month announced as host of the next 2013 South Asian Beach Games. Including some I have never even heard of.

One of those is ‘Beach Tennis’ which Palm Beach features. It is also known by its Italian name, Racketoni. Basically, it is a paddle like racket with a slightly heavier tennis ball. You will often see it on beaches around the world where people play without any net or court just hitting it to each other and trying to keep a volley going. But Palm Beach has a proper, dedicated court at Palm Beach as well as an instructor, Mohamed Adam (shown here in the far court).

3 Thoughts on “Best of the Maldives: Beach Tennis – Palm Beach”