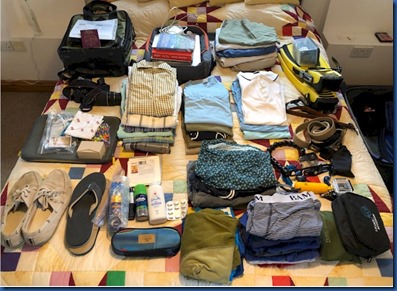 WTM was a great way to whet our appetite for our overdue return to the real Maldives this week. Tour #18 will take us to Biyadhoo, Amilla, Soneva Fushi, Ritz Carlton Maldives and Pullman Maamuta.

One new item is a face mask. Required for the duration of our BA flight. Having done a few long flights over the past year, you really want one that is comfortable (and for me, one that doesn’t cause my glasses to steam up).

I take a computer (and charger and case) for my work taking notes, researching, logging photos, etc. as well as for keeping in touch with the office back home (which makes it easier to stay longer and means I have less urgent work piled up when I return). We can also use the computer to watch Netflix, and it is an easier tool to use for managing and editing our photos and videos.

As a get our bags ready, and sort out all of our COVID19 requirements, we pulled out our Packing List to make sure we weren’t forgetting anything. I thought I’d share it here as a reference for people going to maybe for the first time or even for veterans to prompt them for items they might not have thought of:

My Maldives Complete partner in all adventure, Lori (an accomplished blogger in her own right and regular contributor and editor) has agreed to go through her suitcase and share her tips as well (photo at bottom): 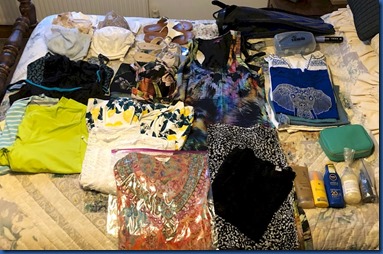 (For future planning reference, I’ve now added a tag “Trip Planning” with all my posts concerning getting ready for the big trip.)

Posted in: Other \ Tagged: trip planning

How to Interpret a Resort Review 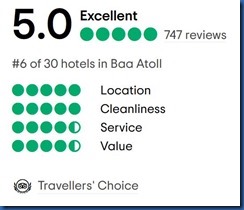 Ratings are often the first thing people turn to in deciding on their resort of choice, but these handy shorthands are also fraught with biases and confusion. I thought I would pull back the curtains a bit on these metrics and badges to makes then easier to use and interpret when research your perfect resort.

Traditional “star” ratings (eg. “5-star hotel”) were developed by industry bodies and were determined by a methodical list of criteria. The advantage to this approach is that is objective. The problem was that the checklist reflects quantitative metrics, but not qualitative aspects. It counts things like the number of electrical sockets and whether the bathroom has a bidet, but doesn’t assess the quality of design, materials, aesthetics, etc. Resorts quickly learned to game this system by installing the cheapest versions of anything that would tick the assessor’s boxes to get a coveted “5-star” designation for a fairly chintzy property.

The Internet and social media introduced the notion of crowd-sourced reviews. The stars that visitors gave were anything but methodical or defined. The reviews were completely haphazard with “1-star: Terrible” reviews going to exceptional properties who made one slip-up during their visit, and “5-star: Excellent” reviews going to mediocre properties visited by people who were just delighted to be on holiday or wanted to boast to the world how amazing it all was.

The notion is that a savvy reader will dismiss the outliers and focus on the shape of the score histogram (eg. shifted more heavily to positive or negative side). Social media does add the richness of two features: (a) the text review itself (so you can drill down into the specifics of the assessment as make your own judgement about whether the attributes focused on concern you or the assessment seems justified), and (b) the authority of the writer (based on reputational scoring like “Helpful” votes).

Seth Godin articulates this dynamic well in this piece “I Hate This Restaurant” (and this is just the inadvertent failure ignoring the deliberate toxic practice of social media extortion where people find tiny failings and demand a big discounts or compensation under threat of them unleashing their condemnations all over social media):

As a result of this “expectations driven” reviewing, many resorts have shifted the direction of their approach to ratings. Instead of trying to goose their rating as high as possible with covering the official bases as expediently as possible, now many properties voluntarily downgrade the advertised “rating”. So they might officially be a “5 star” property, but they advertise as a “4+ star”. That way, guest come expecting one standard of quality, but find a higher than expected one. Exceeding such expectations is the key to strong social media ratings. Better to be a 4-star on the profile but a 5-star on TripAdvisor, than visa-versa.

Whatever you do, dismiss the press releases and website merit badges from industry awards (eg. “Best Hotel in the Indian Ocean by the So-So-So Travel Group”). Said industry body charges X-thousand dollars for a resort to buy a table at their award ceremony and pretty much makes sure that everyone who attends, walks away with an award. In fact, in some cases, the more awards a resort flaunts, the more likely they are trying to cover up major inadequacies by buying endorsements (Yes, I know, I have featured some awards on the website and my email signature, BUT I did not pay anything for these and would never).

So with all of these review shortcomings, how is one to assess the quality of a resort in researching a holiday? I do check out the social media ratings (mostly TripAdvisor). I look at the shape of the star distribution (eg. how many 1-stars, how many 2, etc…). I will take a peek at a couple of 1-star reviews our of curiosity to see if they had identified anything truly serious, but in nearly all cases it is just the rambling trolling of a disaffected whinger. I do select for the most highly rated reviewers (eg. most Helpful votes) as these folks are likely to have sensible perspective so that their review will share useful insights.

How to Pick the Perfect Maldives Resort 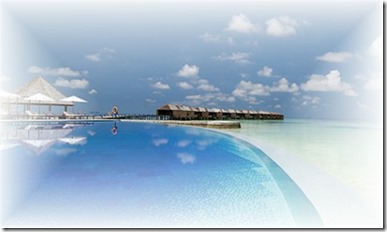 A sunny Bank Holiday Weekend was an inspiration to invest a bit of time on Maldives Complete and revamp the Best of Maldives section a bit. With now over 300 distinctions, I’ve had to add yet another tabbed page (‘Service’) to hold them all. I split out sub-categories in a few areas like adding a ‘Sweets’ section for ‘Food’ and splitting ‘Drinks’ into ‘Soft’ and ‘Bar’. I added a new section called ‘Workplace’ distinctions since good management and workplace innovation are pet professional subjects of mine.

With more resorts with more distinctions than ever, it has never been harder to wade through the riches of choice to find the resort for your often once in a lifetime trip. The Sunday Times featured a piece a short while back on ‘How to Pick the Perfect Resort’, but it focused on skiing). I often get emails and other contacts from Maldives Complete fans looking for advice on choosing the best resort for them (there is no ‘best resort’, there is only ‘the best resort for you’). I thought I would document the steps I often go through to help them winnow down the selection…