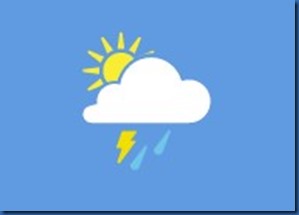 Per ritual, we checked the weather.com forecast for the Maldives the week before we departed. We tend to visit in July and pretty much the standard forecast is “Thunderstorms” EVERY day. But this time, several of the days showed the graphic above – pretty much a perfect depiction of Maldives weather in July. It combines in a single JPEG rain, cloud, thunder, sun. It’s basically the meteorological equivalent of saying “hell if we have a clue?!?”

One would think this profusion of thunderstorm forecasts would spark trepidation for our keenly anticipated trip to the tropical sun. It certainly does for a number of TripAdvisor Maldives Forum posters who fear their trip of a lifetime is going to be spoiled when they see these predictions. But, as I have described numerous times, you have to know how to interpret these forecasts.

When it says “Thunderstorms”, it doesn’t mean that thunder and lightning will be raining down on you from dawn till dusk. In fact, in many cases, the predicted storms hit at night when you are tucked comfily in your cozy villa and when you wake the sun is breaking through the clouds to dry up the puddles littering the sand-scape. The thing is that most of these storms come in quite isolated “little black rain clouds” (as Winnie the Pooh would say). Sometimes we entertain ourselves sipping cocktails and watching these storms approach our island and placing bets as to if it will hit us. It gets closer and closer with the sheets of rain becoming more and more visible. Sometimes it just bypasses us completely. Other times, it hits us full on and we scamper for cover while it passes over for a few minutes.

The video below is a classic example of one of these isolated “showers” we filmed at Faarufushi. We had just emerged from snorkelling (so a bit damp already) and the heavens just opened up on us. Strangely, the day was quite sunny and when you looked all around you saw plenty of blue sky. It’s just that one particularly sodden cloud decided to dump its precipitation on us then and there.

As I was flying amidst these mid-summer clouds themselves, I perused the Trans Maldivian Airways Magazine “Island Skies” piece from Eleonora Fiorini titled “It’s Always the Right Time to Visit the Maldives”. He starts off noting himself “Bruno’s father used to visit the Maldives islands every year for a month in July, and every time, he never had more than just a handful of consecutive days of rain.” The article goes on to look at Bruno’s meteorological study of the area explaining why Maldives weather is “basically nice all year round”. ]

First of all he noted that the Maldivian weather is, by definition, unstable saying “The climate at the Equator is like a boiling pot, and you have to guess where the next bubble will come up” (and micro”storms” like the shower in the video below is a perfect example of a little bubble of weather).

But what the equatorial conditions do to volatility, they also do to moderation: