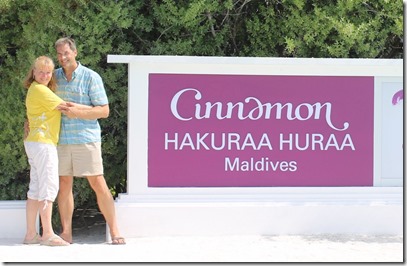 Cinnamon Hakuraa Huraa sits like a whimsically mystical village in the middle of an equally quizzical seascape. The resort has one of the most distinctive “skylines” in the Maldives with its orb-topped tented roofs on villas and jetty. The structures sit like alabaster Bedouin tents nestled in a sandy oasis of dryness in a boundless desert of turquoise sea.

When the tide goes out this dot of land swells to nearly double in size as submerged sea beds emerge into beach for a few hours. The long, slow gradient is reminiscent of a Maldivian Mont Saint-Michel (but no need to worry about being trapped by rushing incoming tide as tidal forces are much more modest near the Equator). The reason the resort has the longest arrival jetty in the Maldives is because it has to go out that far before you hit water deep enough for a boat to get to.

This distinctively shallow lagoon imparts another quirky aspect to the property…if you want to go explore the marine life, instead of snorkeling you can go for a little stroll. While the main event for sea-life aficionados in the Maldives is the house reef drop-off, I’ve often thought about having a “lagoon rating” (to parallel the “House Reef Rating” on the website) because a number of resort lagoons have their own distinction. In Hakuraa Huraa’s case, their east-side (water villa) lagoon holds quite an extensive array of small coral croppings. The area can have some tricky currents at high tide (signs warn people not to swim), but at low tide it is a giant tidal pool that you can simply wade through. The lagoon has lots of shards of broken coral so you will need to wear some foot protection. That said, you will also need to be very careful not to step on any live coral (ie. looking for the white sandy patches). We were quite encouraged by the extent of little pink corals popping up all over the place. During our little ramble, we were treated to the most bizarre “Snorkel Spotter” outing ever. Yes, all over the Maldives you will see fish and creatures like puppy sharks and stingrays scurrying in the shallows as you walk along the shoreline or above on a jetty. But this excursion was something a bit more. The coral croppings gave the seascape dimension. And the creatures we saw were more than you would see from these typical vistas – a turtle sleeping, a moray hunting, a baby lion fish hiding. We weren’t staring down at them from afar, but like a good snorkel, were right there in their world along side them.

Cinnamon has boosted this spirit of water-world whimsy with a veneer of sparkling white and accents of bright colour. An extensive range of activities (probably the most extensive beach activity offering in the Maldives, including built-in Beach Cricket and Beach Rugby cross bars), and delicacies (including snacks offered during the day and special dining nooks) make the resort experience as enchanting as it looks.