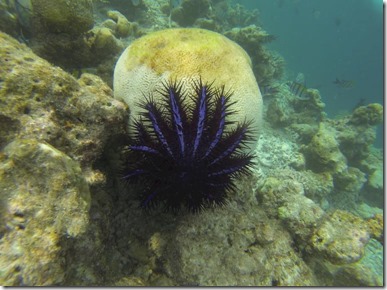 QI returned to our screens this weekend with “Season N” as in nautical nature news.   And today’s Maldives Complete QI instalment on the occasion is just that.  Breaking news on the fight against this scourge of the reefs.

Like so many Maldives islands, Kandolhu faced an outbreak of COTS earlier this year and researched a number of methods for effectively solving the problem. The resort Deputy Manager Laura is a trained marine biologist so they had a bit of a ringer in the battle against this reef destroying creature.

One technique she found was injecting bile salts that you could get from Australia. But that was very expensive. Then, they found out that injecting them with vinegar was effective in killing them and was a non-toxic substance. In the end, Kandolhu has removed 9,000 COTS in the past 6 months and appear to have the situation well under control now. We didn’t see a single one in our near circum-navigation of the island.