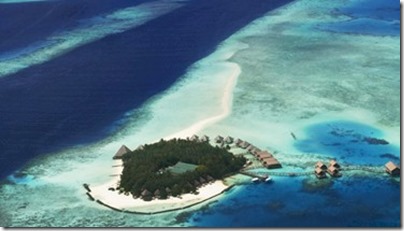 For many Maldive aficionados, the holy grail of the ideal idyll is a spectacular house reef. Typically, the best house reefs are on the dot-shaped islands in the center of an atoll as the topology on the edges of the atoll lend themselves to long, broad shallow tables which make for great lagoons, but often hard to reach “drops off” (the defining feature of a great house reef).

The Gangehi resort has a very distinctive house reef because its drop off is in a “channel”. Channels exist all over the Maldives and are narrow water passages between the inside and the outside of the atoll. Gangehi’s is named “Gangehi Kandu” which is the Dhivehi word for these waterways.

Bigger fish tend to like the deeper channels, but being intra-atoll, they should be a bit calmer. Certain species tend to favour outside the atoll and other the inside. But this area would seem to have the best of both worlds (Gangehi also has a sheltered side (East) to its house reef to provide more conventional house reef snorkelling). The resort brochure describes…

“Gangehi Island lies on the north-western edge of Ari Atoll, on a oceanic pass, a natural channel crossing the atoll ring that keep in communication the atoll lagoon with the open ocean. The pass, named ‘Kandu’ in Divehi, has a very high ecological function for the Atoll marine life, as it makes possible the renewing lagoon waters. Kandu usually subject to strong currents, incoming or outgoing depending on the tide conditions, and creating a unique environment great for many pelagic species, and a few benthic species cling to the substrates. Gangehi Kandu is one of the longest channels in the Ari Atoll, with a drift of more than 2.5 km from the channel’s entrance to the end of the dive at the inside of the Atoll. The wall here is quite unremarkable really. There are interesting things to spot such as lionfish, moray eels and porcupine fish but the real action is out in the blue. With an incoming current the visibility can be excellent and the parade of pelagic and local residents, impressive. You might see vast schools of fish like fusiliers and blu trigger fish feed in colliding waters, a number of reef sharks as well as barracuda, jackfish and tuna. Large squadrons of eagle rays are frequently seen here seemingly flying in formation in an unforgettable display. The bottom of the entire channel at Gangehi Kandu is sandy, making it a perfect resting ground for Stingrays, White Tip Reef Sharks and the Leopard or Zebra Shark which is commonly spotted here when the conditions are right. At this impressive sites divers can find caves covered with excellent soft coral, a wide range of colourful invertebrates, gorgonians and sponges. The water inside the atoll is breeding ground for plankton and when the outgoing currents bring the plankton-rich water through the channel into the big blue large and beautiful species like manta come to feed.”

Lori and I had the immense pleasure of snorkelling the kandu during our stay there and Lori then went on a drift dive at the edge of the atoll where she saw black sting ray, octopus, eagle rays, a monstrous Napoleon fish (bigger than herself) and many, many sharks especially grey sharks. 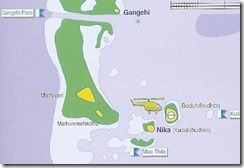