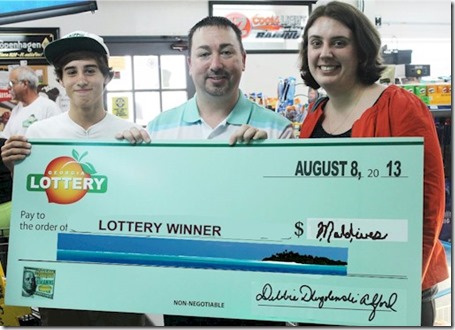 What would you do if you won the lottery?

A less than rhetorical question for a few very lucky souls this week. The Madison Avenue sponsored script is “Disneyland,” but the more unprompted survey says – “Maldives”. The article“If I won the lottery the first place I would go is…” that the first thing people do is go on a dream holiday, and the top dream holiday destination was the Maldives…

“If you won the lottery where would you go to on holiday? A leading travel agency asked Britons where they would most want to travel to if they won the jackpot and it revealed that the Maldives is top of the pile…The amount of winnings was any amount over half a million pounds and if money was no object Britons would go to the Maldives as their first holiday pit stop. The website Sunshine wanted to look into the holiday habits of Brits and in the survey of 1,672 adults they were all asked about how they would spend their winnings. 78% of people said that a holiday would be first on their list of expenditures and all were asked if they won over 500,000 where they would go on holiday first. According to the poll, the top 10 most desirable holiday destinations, if money were no object for Britons, were as follows:

You’ve just won the lottery, what are you going to do? I’m going to the Maldives!

2 Thoughts on “Best for Lottery Winners”