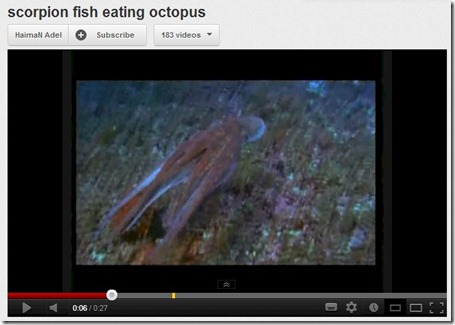 Lions and Tigers and Bears…oh my!

There are all types of ‘Big 5’ possibilities for types of ‘Snorkel Safaris’. The TripAdvisor Maldives Forum discussed this subject a while back where I proposed the following added ‘Big Five’ lists…

One I thought of since would be a ‘Namesake Safari’. Not the biggest nor most prominent sea creatures, but the ones who by name most evoke a ‘safari’…

And in a safari, one of the most prized events you can catch is a ‘kill’. Some predator like a lion or leopard catching a gazelle or water buffalo. I would say that in Snorkel Safaris spotting such an occurrence is even rarer, but the YouTube video (see above) of ‘Scorpion Fish Eats Octopus’ is an epic example of what might be dubbed the ‘Battle of the Camouflage.’