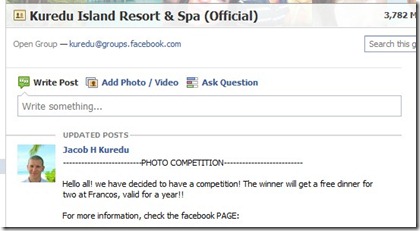 It’s all about the conversation.

That’s the conventional wisdom on social media. It’s all very well and good to put up your blog, Facebook page/group, and Twitter feed, but if no one engages, then you’ve sort of missed the point. The real acid test for successful social media is the ‘social’ bit. To what degree do people get involved with what you have to say? In blogs, it’s commenting and trackbacking. With Twitter, it’s Retweets and Replies. On Facebook, it’s wall posts and comments.

As such, when I was reviewing all of the Maldives resort Facebook pages, I decided to make note of the amount of non-resort comments and posts the page/group got. As I noted in my original post, the Maldives resorts average about one comment/post per day. But, the variation within that average is immense from some who get hardly anything to those like Kuredu who are a non-stop buzz.

Actually, for the period that I tallied (the month of January), Kuredu was the one resort where I simply had trouble counting all of the comments and posts, but I estimate that they we over 1,000! The next closest was Meeru with 213.

It wasn’t just the Wall activity either. As noted in yesterday’s post in Photos, Kuredu had held the runner up position for album contributions with 2,629 snaps. All of this online social activity is possibly an extension of their very strong ‘Forum’.

And not a single cat video nor motivational poster to be seen.

Posted in: Best of the Maldives \ Tagged: best of, Kuredu, social media