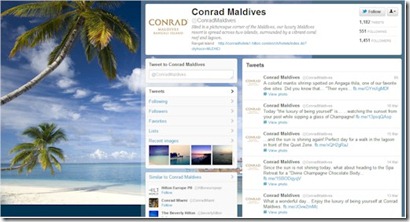 While Facebook dominates the social media landscape, Twitter is much more emerging territory in the ocean of social media. Especially for Maldive resorts where only 10 resorts have active Twitter feeds. They have on average 590 followers and 665 tweets.

The classic standard of popularity for a Tweeter are their Followers. And for the Maldives the king here is 1,446 for ‘Four Seasons’. This account, however, covers both Four Seasons Landaa Giraavaru and Four Seasons Kuda Huraa. So you could argue that it is really about 700 per resort. The Conrad Rangali has 1,364 Followrs (during my survey in January) just on its own so for now they would seem to be the un-asterisked crown.