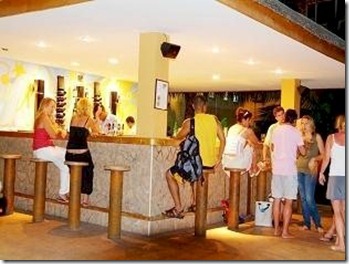 Oxymoron – a word that appears self contradictory. Like ‘losing Patriots’ or ‘local foreigners’. In a world championship every bit as ‘Super’ as the hype (which is a tall order in the USA), the ‘Pats’ (my hometown team) fell short of the mark in the final minutes on Sunday.

For anyone perplexed by why ‘American Football’ (aka ‘NFL’) is bigger than all other sports combined in America, I highly recommend (for those who have access) the BBC iPlayer’s recording of Super Bowl XLVI for an illustration of what makes American Football the sport with the most drama and athleticism in the world at minute 2:17.

For those players making this pinnacle game their career denouement and looking for a place to chill in the Maldives, Hulhule is the place to go for ‘Ex Pats’.

‘Expatriates’ that is. Hulhule Hotel is a popular watering hole for various Male and other island ex-pats and resort workers who converge on the big city. But as Male is dry, the foreigners seek a place to imbibe and the hotspot of choice is is Hulhule hotel which has a liquor license.

So if you want an insider’s view with an outsider’s perspective of life in paradise, then stop on into Hulhule for a chat with some of the semi-locals.

Posted in: Best of the Maldives \ Tagged: ambience, best of, Hulhule