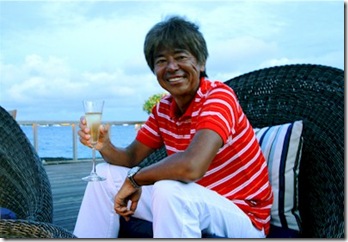 The December holiday season has been packed with all sorts of celebrations from festive Yuletide, big birthdays and even a milestone anniversary for Maldives tourism. The Maldives Marketing & Public Relations Corporation (MMPRC) is celebrating the 40th anniversary of tourism in the Maldives with a special photo competition of nostalgic images capturing the humble beginnings which have grown into a worldwide wonder (see photo below).

The genesis of it all was the Kurumba resort. So it was appropriate for Kurumba to play a big part in the celebrations (they are sponsoring the competition with 2 free nights as the prize for the best photo posted). All of that experience and heritage has made Kurumba a favourite for many. Our first stay there, we attended the weekly drinks evening for repeaters and the bar was packed.

But the champion repeater of all time is also a Kurumba regular – Mr. Mr. Yamagoshi. Mr. Yamagoshi has been to Kurumba 64 times! I haven’t even been to my local pub 64 times. The picture above was taken at the Kurumba Beach Bar during an interview he did to mark the ruby anniversary of Maldive tourism.

The curious (and impressive) thing is that it took Kurumba some effort to figure out who actually was there most loyal customer as they have so many. At first they thought it might be the Mr. and Mrs. Rosenquist whose mere 53 stays at least probably warrants them most loyal couple. Kurumba interviewed them as well…

Congratulations to all the Maldives Resorts on this milestone anniversary and Kurumba for delighting so many for so long. 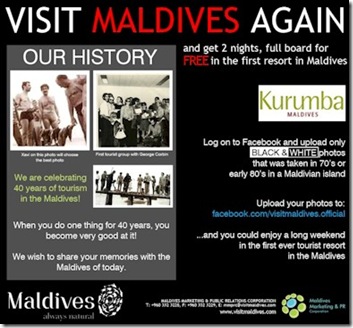 Posted in: Best of the Maldives \ Tagged: best of, Kurumba, repeater, service

One Thought on “Best of the Maldives: Loyal Customers – Kurumba”