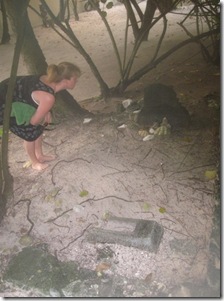 Casting even further back in Maldivian history is Komandoo’s own cultural antiquity – ‘Moussa’s Grave’. Not a lot is known about this character Moussa except that he was from the neighbouring island Hinnavaru and that he must have been fairly important to merit his own memorial stone on his own island. It is now a very unassuming artefact that you will miss if you don’t know where to look for it. But Lori and I had to go check it out during our recent visit. There is special place in my heart for gravesites having spent my childhood waiting for the bus next to one. In fact, my study of that local graveyard and the history of the families resting there earned me a scholarship which paid a big part of my school tuition.

I must say, though, Komandoo is starting to shape up to be like a Scooby-Doo episode. Mysterious gravesite. The management banning ‘pesky kids’ (no under 12s allowed). If the resort gets into some battle over its deed, then I would put my money on the caretaker as the culprit dressed up in traditional Maldivian dress running around scaring the guests. 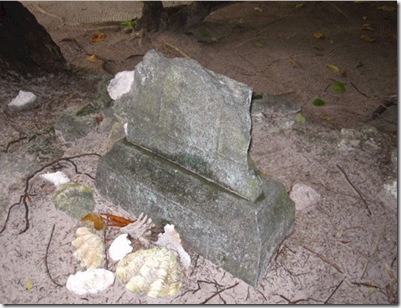 Posted in: Best of the Maldives \ Tagged: best of, culture, Komandoo

One Thought on “Best of the Maldives: Cultural Antiquity – Komandoo”