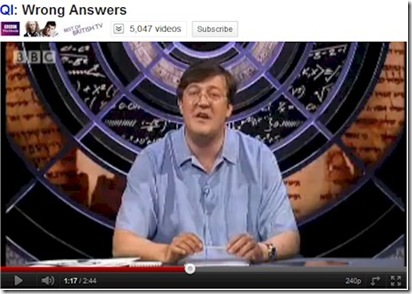 In honour of Stephen Fry’s brilliant QI (short for ‘Quite Interesting’) TV comedy quiz show returning to BBC this weekend, we feature a couple of Maldives QI questions of our own… 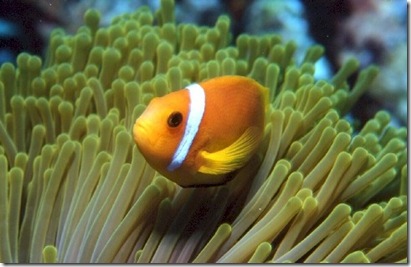 Question:  What common, colourful fish in the Maldives is this a picture of?

[Sound effect]: Buzzzz! Wrong. The character ‘Nemo’ in Disney’s film ‘Finding Nemo’ had three white stripes as a opposed to the single one shown above. 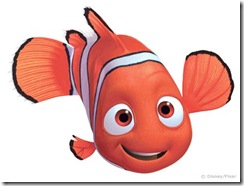 [Soundeffect]: Buzzzz! Wrong. You are close in that the term ‘clown fish’ is often applied to all members of the family of ‘Anemonefish’, but not all Anemonefish are really clown fish including this specimen.

As it happens, a number of Anemonfish have also been dubbed ‘Clownfish’ in their informal names such as Amphiprion perideraion (Pink skunk clownfish) and the Amphiprion melanopus (Fire or Cinnamon clownfish) as well as obviously ‘Clark’s which I said is known as the ‘Yellowtail Clownfish’. But not this species here. Even Wikipedia describes the terms ‘Clownfish’ and ‘Anemonefish’ as interchangeable, but now you know the real distinctions.