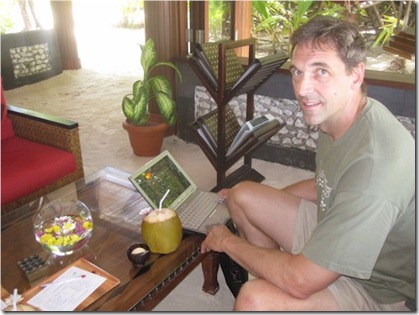 Best Of the Best – A lot of people ask ‘what is the best island’, but the real question to ask is ‘what is the best island FOR YOU.’ As Mohamed Thoufeeq, Reservations Manager at Kuredu says “Resorts create their own atmosphere and that is actually the tradition with local islands.” I kept being surprised by the many funky and quirky bits I would uncover. I would often arrive at an island with the first impression that everything looked so conventional that nothing would stand out. But after a few minutes of walking around, all of these hidden treasures would reveal themselves.

Two weeks versus one week. This was our first two week trip. We used to think that a single week was just fine. That after seven days you get a bit tired of the resort food, miss home, run out of clean clothes. Aside from just ‘more Maldives’ and ‘more time down time,’ there was one dramatic impact that the fortnight stay had over the single week. It meant that when you woke up and the day wasn’t quite so sunny to start with or if a day didn’t quite go the way you wanted, you didn’t worry that one of your precious days was lessened. You figured that you had plenty more and so each inevitable, minor shortcoming was easier to shrug off than the 7 day stay. It was the difference between savouring a fine meal and wolfing it down. I do think that the ideal is probably 10 days – ie. a week straddling two weekends. Then you get most of the 14 days while only burning one week of holiday time. With the increasing availability of commercial flights and direct booking, such a tailored timing is much more feasible than ever (versus the tour operators who want to slot you into nicely synchronised 7 day segments).

Rainy Season. One of the top frets of prospective visitors is rain spoiling any part of their stay. The weather is the weather and anything can happen anywhere. Mother Nature offers no guarantees on planet Earth. That disclaimer said, in my experience, the Maldives worst rainy season is on a whole better the UK’s best sunny season. Official meteorological data is the most objective and scientific, but nonetheless I offer this anecdotal perspective because the ‘quality’ of the weather can get lost in the statistics. Travelling in late July, normally we would be past the depths of the rainy season in May and June. But July is the third wettest month and due to a relatively dry and sunny June people were saying that the rainy season was stretching into July. In fact, when we looked at the forecasts on the night before our departure there was an unending string of thunderstorm icons. So what really happened? Out of 15 days, we got a couple of showers at night while we were tucked in our beds, and a couple of days where you felt some drips and asked ‘is it raining?’ I would say that most days there were clouds in the sky instead of the iconic boundless blueness mirroring the aquamarine sea below.