Kurumba is perhaps the most unsung house reef there is. You don’t often hear about it being mentioned as one of the tops, but I must say that Kurumba is simply the best house reef we have ever snorkelled. And we have snorkelled dozens. Especially for reef sharks, Kurumba is Shark Central (though a local tells me that Bandos is also extremely good for reef sharks). Our first snorkel at Kurumba we lost track of how many sharks we saw at about 20. Some well over a metre long. When they swim, sharks shake their butt more than a double-jointed salsa dancer. We thought maybe it was a fluke. Sometimes you see things snorkelling and other times you don’t is typically how it goes. But every single day we snorkelled at Kurumba, we saw tons of fish and lots of reef sharks of all sized.

But that wasn’t all. Lots of sting rays (mostly by the water sports centre), every type of lion fish, a turtle we swam with. A friend we met found an octopus in the lagoon and took lots of pictures. My wife’s favourite was finding a Zebra Moray (see picture below). They are very shy so she waited by his hovel for a long time hoping for him to pop out a bit more for a better photo op.

Dusk seems to be a particularly good time for fish activity. What we recommend is starting your snorkel around the front/reception side of the island (a bit to the left of the restaurants) around 4:00 pm and circle the house reef leisurely until you hit the Sunset Bar. Pull up there just in time for a sunset pina colada. Then, order your dinner right there too and eat on the beach while the sunset sky changes hues and the stars start popping out overhead. 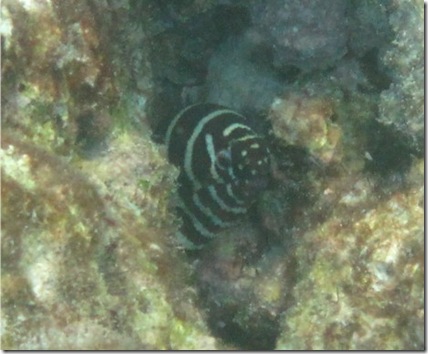