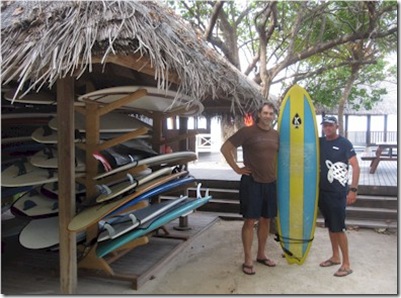 In light of the ASP World Tour which started this week with the Quicksilver Pro event, I thought I would do a few surf pieces. I’ve already covered the Maldives hosting this very same event in June 2009. But you don’t have to be a pro to enjoy surfing in the Maldives. In fact, it would be an ideal place to start. It doesn’t feature the giant rip-curl waves of Hawaii. Instead, the Maldives are famous for long runs of gentle rolls as more modest waves hit the long breakers of extended reefs. If you have never even surfed at all, then the place to go is Four Seasons Kuda Huraa and their Tropic Surf surfing school.

They offer special beginner course for 2 days called the ‘Dream Programme’ where you learn safety, paddling, standing-up and falling-off (I thought that I might be able to skip that last bit seeming well proficient in fall off many things, but the instructor informed me that there is a ‘proper’ way to fall off). They then take beginners to surfing spots that are ideal for novices for guided and supervised outing.

Tropic Surf has a “100% success rate getting people to stand up on the first lesson.” They feature ‘soft boards’ and an instructor is always in the water with the student. I met with the manager Chris Prewitt (see picture above) who described the programme as a “shortcut to success”

For the more ambitious, Kuda Huraa also offer a 4 night ‘Surf’s Up’ package as well as surf cruises on various boats (including the Four Seasons Explorer yacht) to different locales around the Maldives. The Male atoll itself has 8 surf breaks for all levels of skill such as ‘Sultans’, ‘Jails’, and ‘Honkys’. For more information on Maldives surfing check out the Surf in Maldives website or the Maldivian Surfing Association Facebook page