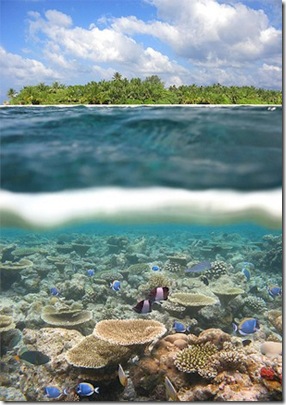 I have written on the ‘best’ house reef and the ‘deepest drop off’ house reef’, but one of the most prominent questions about house reefs is which is the ‘closest’. Given the Maldives atoll topology, often the land bit of the island can be surrounded by a quite considerable about of lagoon, which is very shallow waters, before the island structure itself drops off more precipitously into the deeper surrounding ocean. It is this drop off which is most dramatic as lots of marine life cluster and settle on this vertical structure and the larger expanse of water makes room for bigger fish and bigger schools of fish.

The problem can be that when you have a far away house reef, one can spend a good 15 minutes of boring swimming/snorkelling over an expanse of white sand shallow lagoon before reaching the house reef main event. The real snorkelling luxury is the close by drop off. In forums and reviews, people often talk about ‘close house reef’. That refers to the fact that the ‘drop off’ hits pretty close to the beach.

I asked the experts, the Forum contributors to TripAdvisor’s Maldives Forum, which resort had the closest. It’s a bit tricky because the reef can be very close at some parts of the island and then very far away in others. I had enjoyed Filitheyo’s close house reef about 50 meters away, but Forum folks came back with 20m, 10m, 5m and ultimately 3m from the beach. In fact, several resorts were noted that came within ‘3 metres’ of shore…

I have chosen Vilamendhoo because based on looking at all the resorts, Vilamendhoo appears to have the longest stretch of shore where the drop off is that close.

Posted in: Best of the Maldives \ Tagged: best of, geography, reef, Vilamendhoo

8 Thoughts on “Best of the Maldives: Closest House Reef – Vilamendhoo”