If you do find yourself staying for an extended period or are just looking for some other project to embrace in the final months of lockdown, then why not learn the local language of the Maldives, Dhivehi? I reached out to the stars of this fun and helpful vlog, Kate and Hambe, who gave Maldives Complete an exclusive interview about their project:

Today is UN Mother Language Day. Time for a bit more Dhivehi tutorial. The country itself has an evocative etymology in native Dhivehi…

The individual beads on that jewelled strand also take description names from the local tongue. The chart above illustrates a few of the most common topological terms…

In fact, below is a list in order of the most popular terms by number of dive sites that include them…

Posted in: Other \ Tagged: Dhivehi, diving

As a result, researchers have even questioned if these earlier generations possibly even perceived colours differently to modern peoples. With the sea around and the sky above, such a conjecture certainly would have limited the descriptive capacity of people living in the Maldives. Fortunately, at leas today, the Dhivehi language does have a word for blue – “noo.”

Best of the Maldives: Most Wave Names – Fuvamulah 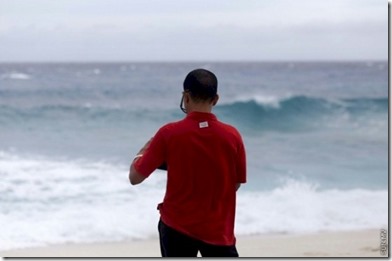 While the Maldives is renowned for romantic islands and underwater reefs, the unique reef bottomology (as opposed to “topology”) has also made it one of the world’s top surfing destination. Not for Hawaiian monsters waves, but for long, gently breaking ones (great for the increasing popular trick riding not to mention beginner learning).

One of the top surf spots is Fuvamulah. So much so that the wave richness has infiltrated their language. Like “snow” to Eskimos and “rice” to Japanese, the Maldivians on Fuvamulah have more words for “wave” than any other language. And like the Eskimos and Japanese, the wave words on not simple straight synonyms, but rather designations for subtle variations.

The Maldivian outlet Sun Online featured a superb piece on the subject titled “Fuvahmulah people could break record for most names for waves!”

“Fuvahmulah has just one and one quarter of miles of reef around the island – resulting in huge ocean waves battering the island unchecked. A wave is not just a wave to the people of Fuvahmulah, who assigned specific names to different types of waves (ralho) – based on their size and the current. This made it easier for the fishermen of the island in the olden days – as they knew just what to do when they heard the name of the type of wave they would be facing that day.”

Eighteen different words have been coined and examples include…

Posted in: Other \ Tagged: Dhivehi

Greetings of the Season 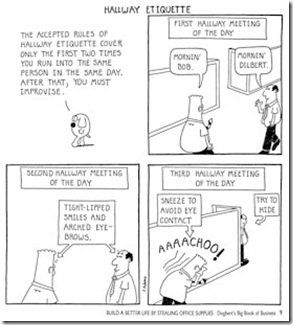 Greetings are always a curious part of any language. The Hawaiians have ‘aloha’ which means ‘hello’ and ‘good bye’ as does the Italians’ ‘ciao’. The English – as in what people in England speak – have an all purpose word ‘cheers’ which can not only be used as ‘hello’ and ‘good bye’, but also ‘thank you’ and ‘you’re welcome’.

Dhivehi is the native language of the Maldives islands and it has no direct translation for ‘hello’ or ‘goodbye’ (http://en.wikipedia.org/wiki/Dhivehi_language). Instead, islanders greet each other with a smile or the raising of the eyebrow and just ask "where are you going?" followed by "what for?" The tradition evoked for me one of the earliest ever Dilbert cartoons show above (featured in Dilbert’s ‘Build a Better Life by Stealing Office Supplies’).