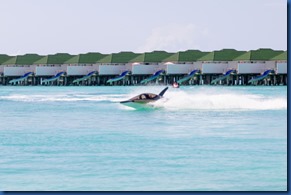 If you prefer your aquatic thrills above the water and fast, then I have now finally seen (after first noting it back in 2014) a Seabreacher introduced at Siyam World

If snorkeling over a house reef drop-off feels like “flying” in water then riding one of these does seem to be like flying Jetson-style over the water.