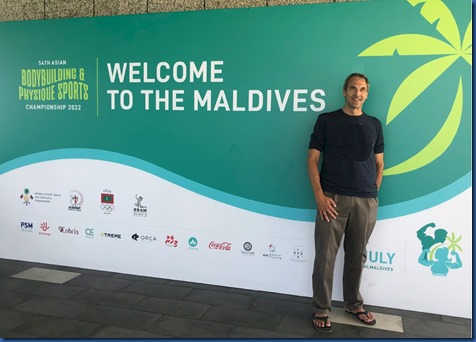 My research early in the year found lots of plaudits for the UAE state airline and the schedule and prices fit well so I thought we would try it.

First, we had to a run the gauntlet of mayhem that was Terminal 3 Heathow. We arrived nearly 3 hours ahead of departure time and barely made it to the flight as Lori was literally the last person to board the plane. There were delays at every juncture, but most was the 90 minute security queue. So much for our relaxing pre-trip cocktails.

When we boarded, we encountered another first – A380. I had read plenty about these airborne behemoths and had seen them on the airport tarmac, but I had never set foot in one. It was a every bit a treat as this next generation flying machine would have you hope for. Spacious, elegant, modern. Large HD video screens. A few inches of extra legroom and seat width. Not to mention the extra aisle headroom making the whole environment less claustrophobic. Nice full power sockets at each seat. The wifi was great value ($17 for entire journey), but pretty weak and unreliable.

After a very quick stopover in Dubai (too dark to see any of its iconic structures on arrival or departure), we were off on the final leg of the Maldives. The Emirates flight is a nice balance of a two-legged trip to there (in the absence of a direct flight which BA has pulled once again from its summer schedule). A longer first leg of just under 7 hours is a good length for a meal, some reading, a few computer games and a film. Then you stretch you legs in Dubai and only have 3.5 hours to go which you can nap through.

Maldives, here we are!