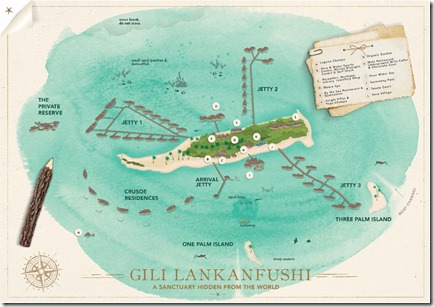 Not quite the Edwardian “bird’s eye perspective” realism that I still haven’t seen, but Gili Lankanfushi’s is my favourite of all the resort maps. It has that pirate-chic treasure map vibe to it.

Gili’s map also veers a bit more toward the primitive art styling. It reminds me a bit of the historic “Maokun” map which plotted the eastern trade route from China to the Red Sea. The excerpt below is tilted so that the north (India) is to the left, and the east (towards China) to the right. Smack in the middle, the sort of mitten-shaped mass before the map gets mostly white further right, is Sri Lanka. Obviously, the expanse of the Indian Ocean is collapsed completely! The little dots in the middle of the map represent the Maldives with the big “circle” being Male.