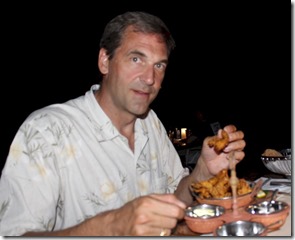 Lori’s not a big fan of sushi, so when we go eat Japanese (which with our son Chase’s interest in Japan is not that uncommon), she always opts for the tempura. And it is one of my favourite dishes as well. Fried food without the heaviness of most western fry-ups because the rice flour lightens the batter. While originally a staple of Japanese fare, it’s made its way onto the tables of other cuisines (our local Thai serves a delightful tempura squid). But despite two decades of travelling to the Indian Ocean, I had never sampled Indian Tempura until our visit to Velaa. And not only was it something new, it was something exquisite. The “Indian” style adds turmeric to the batter, which is a bit firmer. And the item was “Soft Shell Crab with Tamarind Chutney” ($38) which was a distinctive fare in any style.

As it happens, this recipe was featured at another resort, Coco Bodu Hithi’s gourmet extravaganza “Savour 2015”, gut this was a one off event. 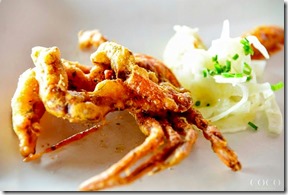 One Thought on “Best of the Maldives: Indian Tempura – Velaa”