Today is a double holiday in Thailand – both the King’s Birthday, honouring Thai tradition and culture, and Fathers Day. The latter is more than a card occasion and is marked by this official holiday.

Someone who will be marking the day is Prasit Latsila Sujith K.V. from Phuket who teaches yoga, tai chi, and Pilates at Centara Ras Fushi. He also teaches the ideal sport for today – Thai Kick Boxing.

As it happens, Thai boxing skills are typically “passed down through the generations” according to Prasit and he learned the art from his father. He competed when he was young and studied it at university.

Another curious fact about Thai Boxing (or Thai Kick Boxing) is that it is the second biggest sport in Thailand. One of the first things I learned running Piero (sport television graphics) is that “Football” is the #1 sport in nearly every country in the world (“American Football” in USA, “Aussie Rules football in Australia, and “Soccer” football everywhere else). The variety comes in which sport is the second most popular. Motor Racing, Basketball, Ice Hockey and Rugby are the most common “2nd sports”. Thai Kick Boxing is one of the rare solo seconds, ie. the only country where the sport is #2 (another example of a “solo second” is Netball in New Zealand and Squash in Egypt).

Prasit offers regular and requested classes at the waterside yoga pavilion which is part of the resort spa (see photos). A session starts with the “Ram Muay” which is a “show of respect to the teacher” and a warm-up. And today in Thailand, is one big “Ram Muay” for wisdom imparting fathers everywhere. 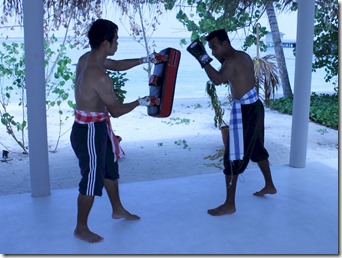 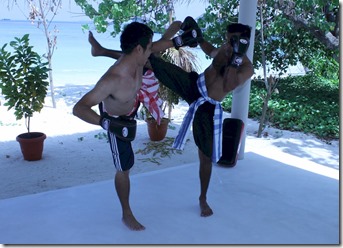