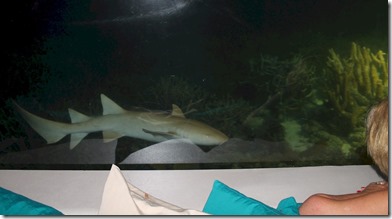 Night reef for everyone.

These underwater wonders are no cheap gimmicks. They run millions of dollars to install. Conventional wisdom says that when you have an expensive piece of capital, you try to sweat that asset as much as possible. That’s why I thought that Conrad’s turning its Ithaa restaurant into a bedroom at night was a stroke of genius to get 24×7 use of that great facility (though they abandoned that practice as the logistics of converting it back and forth each night was too difficult).

Huvafenfushi’s underwater spa, LIME, is world famous. And it too has decided to extend the enjoyment of this distinctive facility beyond business hours. Its night time activity – SpaQuarium – focuses on, well…the night. The stygian capers of the undersea world.

Even the most avid snorkelers and experienced divers often haven’t had the chance for a night dive to venture into this hidden world. My wife went on a night dive with our son Chase once and she said she didn’t see much because we was so worried about losing sight of Chase. Much as the reef seems teeming with activity and life during the day, the night-time is when the reef party really kicks off. Many sea creatures have limited eye-sight and potential prey exploit that with a nocturnal lifestyle where the ocean darkness helps shroud them from predators (we were told that on more than one occasion a shark has even bumped into the LIME glass not seeing it).

This regular resort event in the underwater spa starts around 9:00 a few times a week. Huvafenfushi staff greet you when you arrive with a glass of champagne and some tropical fruit with chocolate sauce to dip them into. The resort marine biologist, Nicole, provides commentary and a guide to this lightless world. Lori and I sat watching a smorgasbord of fish life, but especially lots of trevally and jacks, and the black tipped reef sharks and nurse sharks visiting were the special delight.

At the penultimate bottom of the food chain, zooplankton (ie. fish larvae, shrimp larvae, tiny crustaceans) come out at night to feed on the phytoplankton (the absolute bottom of the food chain). During the day, the zooplankton hide from predators on the sea floor, but during the night they emerge making the ocean cloudy with microscopic life. If you look very closely, you can see the translucent slivers darting about and sometimes you can even spy their miniature eyeballs.

Phytoplankton are tiny plant material floating in the water. They may be microscopic individually, but collectively they are massive. They produce 50% of the earth’s oxygen and can satisfy the hunger of the largest fish (whale shark) and largest mammal (blue whale) in the ocean.

You can also see the actual coral animals who bulge out of their rocky skeleton to feed on the phytoplankton at night. The sharp coral edges get all billowy and fluffy with their protruding bodies and they poke out of their calcified homes.

The annual highlight of the night time is appropriately post-watershed coral spawning. In this season, the female corals first release their eggs which such abundance that the water will turn red and you can even smell the eggs. Then, at the right moment (ostensibly aligned with the full moon cycle), the male corals release their sperm into the water to mix with the cloud of eggs. It is such a spectacular event that the Nicole says she and few staff waited for it in LIME and when they saw it starting, donned their masks and snorkel so they could go outside and jump in to witness it more closely.

After the first hour or so us all taking in the eerie sights in LIME’s broad glass vistas, the staff turned out the room lights and and handed us ultraviolent light torches and glasses (see photo at bottom). When you shone the light on certain species of coral (like brain or certain anemones), they florescence with hidden yellows and reds like some sort of 1970 teenagers black light poster.

The final part of the evening was to turn out all lights. This pitch darkness allowed us to witness the mystical bioluminescence display by the zooplankton. Like watching fire flies on a summer’s evening with miniature nano-diodes flashing on across the seascape. They were particularly prevalent when the water was disturbed so if you spied a particular frenetic fish zooming past, it would typically leave a trail of these little stars.

By far one of the best “experiences” in the Maldives I have come across. A mesmerising glimpse into a hidden world so few ever get a chance to see. 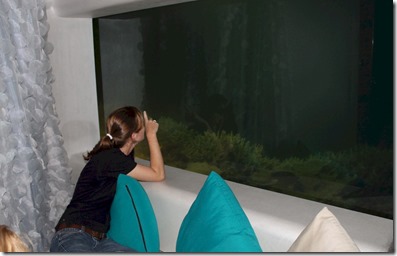 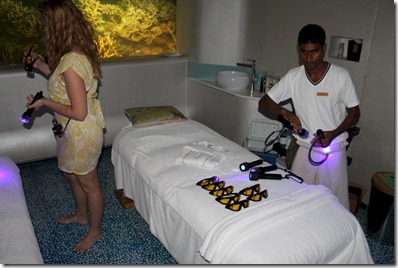 2 Thoughts on “Best of the Maldives: Night Aquarium – Huvafenfushi”