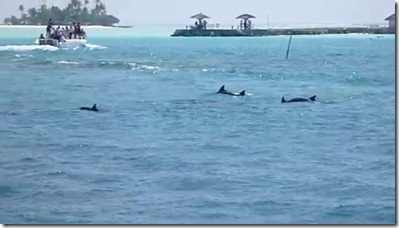 The best free divers in the ocean are our aquatic cousins the cetaceans. As I said yesterday, that’s not ‘free diving’ as in ‘free beer’. Nor is it as in ‘born free’. But in Rihiveli Beach it is. Rihiveli have their own resident dolphin pod in their lagoon.

‘Swimming with dolphins’ is one of those magical experiences that are regularly found a top people’s bucket lists. So popular that an industry is growing quite lucratively to provide dolphin swimming experiences. Some of these are tracking dolphin pods down to jump in the water and snorkelling with them. We tried one of these excursions in Mauritius and the dolphins seemed quite bored with our presence and simply kept their distance. Because of the dolphins independent mindedness, another popular alternative is swimming with dolphins in captivity. Either in large swimming pools or enclosed ocean spaces. The Maldives has approved a Dolphin Lagoon, the website for which was launched yesterday.

Such a facility has stirred, and always does, much debate about the ‘zoo issue’. The arguments essentially boil down as follows. Opponents say it is inhumane and immoral to extract creatures from their natural habitat and stress them with confinement purely for our entertainment. Proponents say that such facilities allow people to connect with these creatures they normally would not get a chance to encounter which in turns build financial and political support for environmental causes which in turn enhances the lives of the entire animal kingdom. I personally line up on the proponent side. Of course, I am all in favour of regulation and oversight to ensure that the animals’ captivity is as healthy and comfortable as possible. But in our increasingly virtual, urbanized, manufactured world, the more voters (especially powerful ones who take posh holidays) and walking pocketbooks (especially affluent ones who do the same) who have the chance to be enchanted by these whimsical creatures, the better the prospects for their species overall.

But if you want see the ‘born free’ diving version, then Rihiveli is your resort.

Posted in: Best of the Maldives \ Tagged: best of, fish, ocean, Rihiveli Beach

2 Thoughts on “Best of the Maldives: Dolphins – Rihiveli Beach”