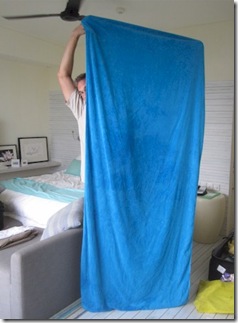 A big shower calls for a big towel. And the biggest towel I have ever seen, in the Maldives or elsewhere, are the Kandooma beach towels. They are longer than a king sized bed (more than 2 metres) and nearly 5 feet long (see above). That’s me holding it up and I’m an not a small guy (I stand 6’ 4”). They were also soft and fluffy (I hate stiff, thin hotel towels) and quite a fetching shade of Maldivian blue.

Posted in: Best of the Maldives \ Tagged: bathroom, best of, Kandooma, service