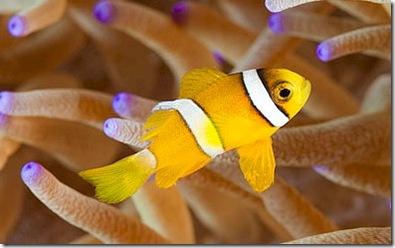 Question: For those who have been paying attention this past week, what is this a picture of?

Answer: Now that is a Nemo fish! I know because it has the three white stripes!

[Soundeffect]: Buzzzz! Wrong. Actually, the Maldive species ‘Amphiprion clarkii’ has three white stripes when they are young, but as they mature they turn a dark-brown/blackish colour.

Whatever you want to call them, one of the best places to see Anemonefish is Four Seasons Landaa Giravaru. Not just Anemonefish in general, but specifically the babies as their Marine Discovery Center has a breeding research project underway. One downside to the popularity of the Disney film is the popularity of capturing ‘Nemo’ fish for fish tanks. Landaa hopes to be able to improve breeding knowledge to both stock the ocean and to provide an alternative source of supply for fish tanks so they won’t be hunted from the reefs.

If you thought that Anemonefish were cute, the babies are all more the cuter. I couldn’t get my wife out of the Center she was so entranced watching them dart in and out of their host anemones in an incessant tease of pseudo-hide-and-seek. And not just the anemonefish, but the anemones themselves provided a bit of action. You could see them in all different positions all over the tanks. Resident marine biologist Harry Masefield (see photo below) explained that the anemones were quite active and often tried to escape from the tanks by crawling out the top and so they had to devise all sorts of guards. With their swaying tendril-like arms they seem more like colourful vegetation than the quite animated animals that they are. 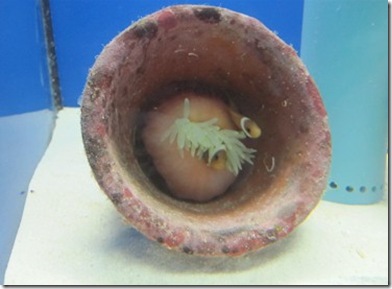 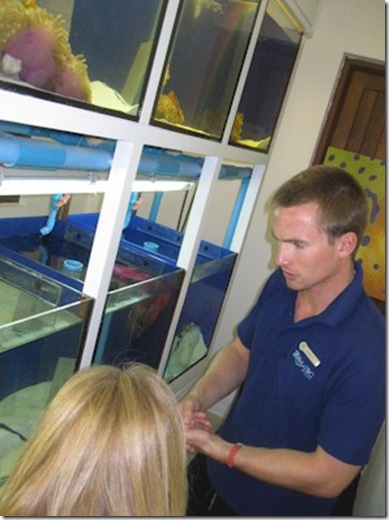